Inspired by the Telegraph’s article ranking the 2018 World Cup kits, The Laziali thought that it would be a good time to find out which kits over the years prove to be the most popular amongst Lazio fans. The top-four kits from each decade have been selected; entirely subjectively. Not included in this article are round of kits from the 2018/19 and 2019/20 seasons. For a detailed overview of the iconic Maglia Bandiera design – which will be seen many times below, as it is one that has been emblematic of Lazio across the decades – check out Fabio Belli’s excellent piece on the history of the shirt at Lazio Story.

Kicking things off in the 1980s, this was the decade that football shirt design began to move on dramatically from what one could consider the ‘traditional’ designs:
Lazio had some wonderful kits in this decade, and there’s immediately a difficult decision to make between two very similar designs – and the 1982-83 Home, manufactured by Ennere, just edges out the Tuttosport 1986-87 Home shirt. Both versions feature the iconic eagle motif with stripes that would reappear decades later – and although tempting, it didn’t seem right to pick both.
Next up is the 1983-84 Away shirt. This looks familiar! The Lazio emblem & Seleco logo would, of course, pop up again in the 2016-17 season. As in the previous season, Ennere is the manufacturer – just about the only element of this shirt that hasn’t reappeared in the 2010’s.
Third is the 1981-82 Home shirt. One of the rare occasions in which Adidas were the technical sponsor, the red Tonini sponsors logo makes this kit a real departure from the traditional Lazio designs.
Rounding off the decade, another kit worn in Serie B. Kappa’s 1987-88 Home shirt was built around the white collar and cuffs foundation that we’d see repeated many more times in the following years, but never outdone:
Honorable mentions are due for the 1988-89 Away shirt – a bright yellow change strip should always be celebrated – and the 1984-85 Home shirt featuring the eagle motif across the shoulders.

The 1990s were something of a transitional decade for football kits. Shorts got longer, shirts got baggier, materials and fit changed dramatically. The decade finished with not only one of the best teams in Lazio history, but some of the best kits, especially after Puma took the reigns as the technical sponsor from Umbro. The Laziali have had to be careful not to allow the 1999-2000 season to occupy all four slots. The template first used in the 98-99 season for home and away kits are a classic with the large Con Fascia across the chest and sleeves. At a push, the home kit wins out.

1992-93. Gazza’s arrival in Rome. Signori’s first Capocannoniere. Giuseppe Favalli’s first appearances for Lazio. This shirt, in all honesty, is probably less worthy than the home kit that succeeded it – but the history imbued in it carries it over the line for this selection.

Completing the shortlist are two shirts from the Centenary season. One is the magnificent Away shirt with the commemorative crest which underwent three iterations of the main sponsor across the season – featuring Cirio, then Siemens Mobile and finally Stream for the Coppa Italia Final. 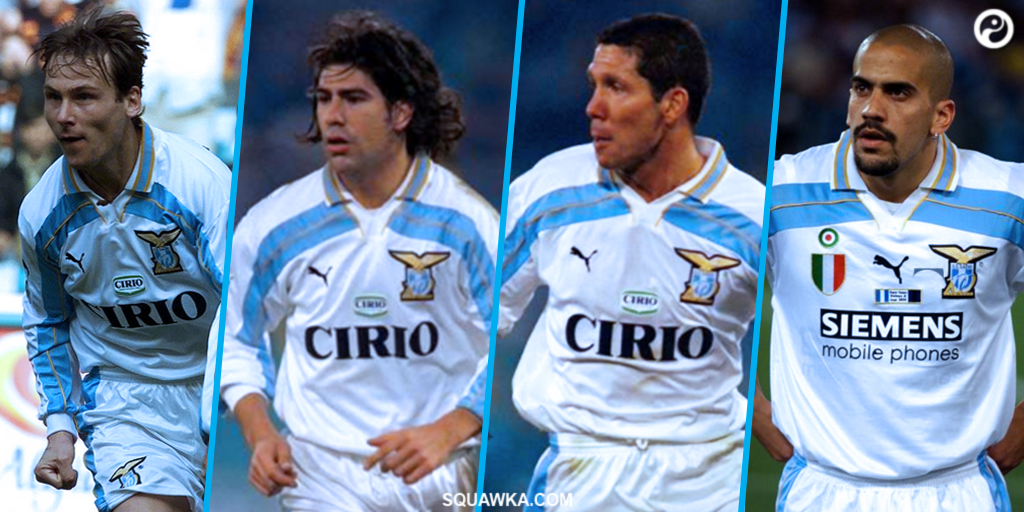 Finally, the shirt that Lazio wore through to the Quarter-Finals of the Champion’s League, the 1999-00 Third jersey used for cup competitions. Even now after nearly 20 years, one cannot look at a can of Del Monte fruit in the supermarket without thinking of Mihajlovic’s impossible free-kick away to Chelsea in the second group stage, or Simone Inzaghi and Alen Boksic putting five past Marseille…

Honorable mentions include the aforementioned 1993-95 home shirt, 1995-96 away kit – which wouldn’t look out of place on a footballer today – and the 1996-97 away shirt which is alarmingly popular amongst football shirt traders online.

On to the 2000’s. By mid-decade, it seems like Puma had expended all their creative energy for the design of Lazio kits, with the selection for the decade being very much biased towards the first few seasons. A case in point is the 2001-02 home shirt:  With patches of white under each arm, this was a significant departure from previous efforts and seemed to line up with the changing of the guard happening in the playing staff – with Nedved, Veron, and Salas being replaced by Fiore, Mendieta and *cough* Darko Kovacevic.

This was a particularly interesting season kit-wise. Not only were there separate home and away kits for domestic and European competition, but this was the last season using the never-bettered Puma typeface that had featured on Lazio shirts since 1998. 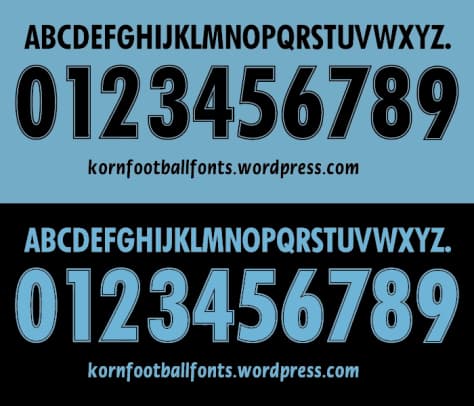 It was hard to not select both European shirts from the 2001-02 season – but going out in the group stages cast a bit of a cloud over two excellent designs. Nevertheless, the white pin-striped European Home shirt wins out this time.

It’s difficult too to find many kits from the mid-noughties worth writing about. Paolo Di Canio and Tommaso Rocchi went to war together in the 2005-06 home shirt, which would be entirely forgettable were it not for the one white shoulder.

The 2000-01 Cup shirt was probably less aesthetically pleasing than the shirt that succeeded it – but associated with incredible games such as the 3-3 draw with Leeds and the desperately unlucky defeat to Real Madrid in the Champion’s League that season means it makes the cut. 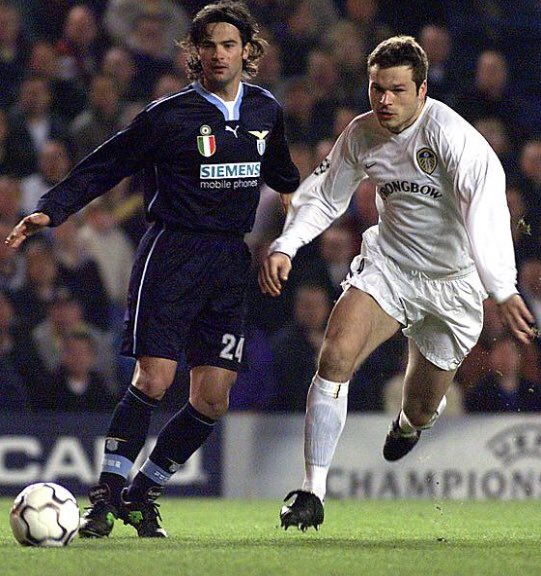 Honorable mentions are due for the 2006-08 away kit – a navy change strip is always welcome. The aforementioned 2000-01 Cup shirt is definitely worth a shout, not least because it gives an excuse to add pictures of both Lucas Castroman and Juan Pablo Sorin when they played against Red Star Belgrade. Finally, the 2009-10 Home shirt is one that might polarise opinion. Some think it inspired, some think it insane – but you do at least get the sense that Puma was making an effort again after some truly insipid designs in the preceding years. 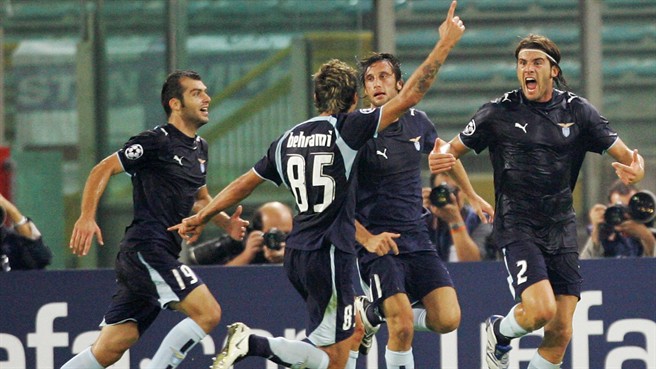 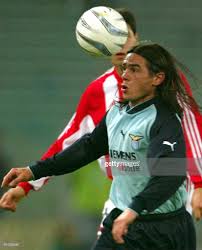 This decade started slowly in terms of shirts worthy of inclusion – but then really ramped up with the advent of Macron as the technical sponsor for the 2012-13 season, they made a fairly reserved start but really started turning heads by 2014-15 for the club’s 115-year anniversary. The standard shirts released for that campaign were of little interest, but the anniversary kit, replicating the classic Maglia Bandiera designs from the 1980s, was a massive hit and deservedly takes the first slot on the poll.

Macron ran with the theme for the following season, releasing Away and goalkeepers shirts in the same template. Of that stable, we’ve gone for the greyed-out goalkeeper’s shirt as used in the Europa League, narrowly beating the all-black ‘stealth’ shirt used by outfield players in the same competition.

Another season, another set of beautiful kits. In 2016-17, Macron’s efforts were based around a simple, collared shirt, executed brilliantly. Again a close-run affair but the navy away kit wins out.

To close out the selection, we’re right up to the present day with the 2017-18 Away kit. Reminiscent of the legendary 1999-00 European shirt, this deservedly rounds out the shortlist for this decade.

Honorable mentions are due to just about everything Macron has made since 2014 – especially the 2017-18 home shirt, resurrecting the 80’s-era club crest and worn in the SuperCoppa victory over Juventus.

To close out, the ‘What Were They Thinking’ award goes to this asymmetrical abomination that Puma disgorged in 2010-11: