League football in Italy returned for 2019 and there were thrillers up and down the peninsula. Follow along as Vijay Rahaman provides the review of Matchday 20. 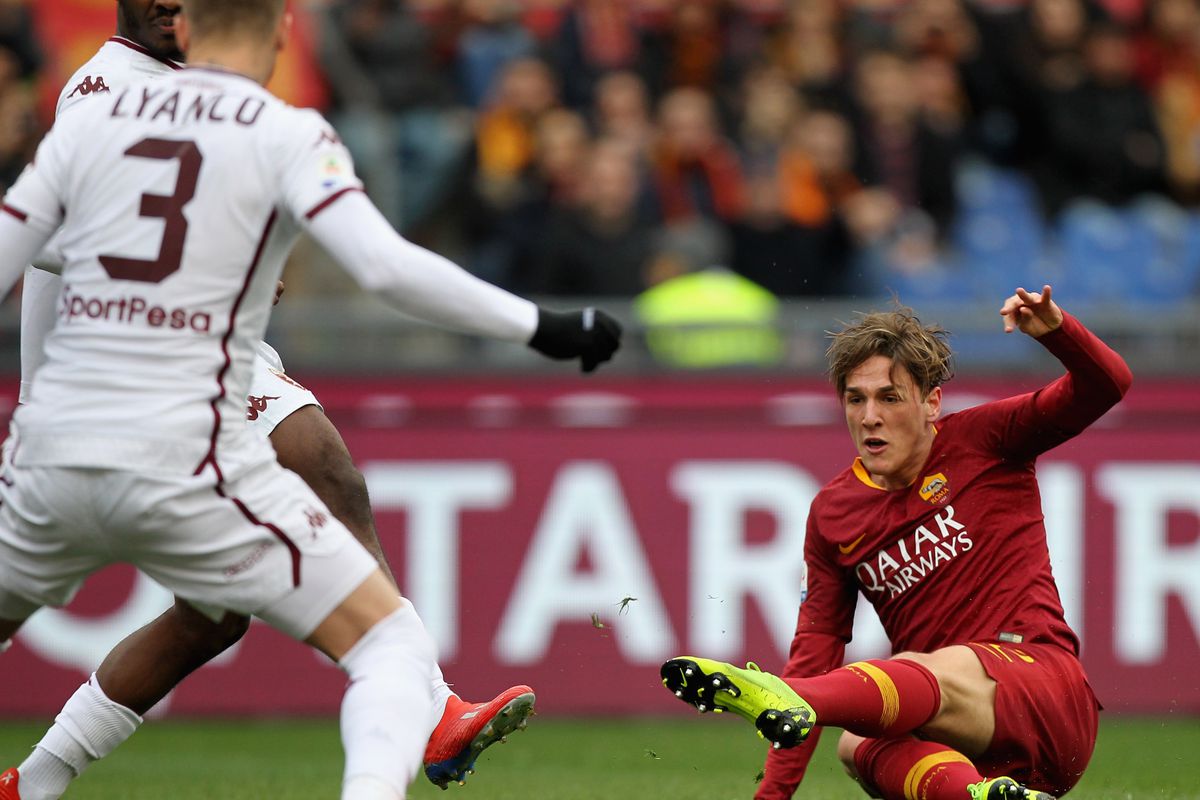 Roma nearly threw away this result after giving up a two goal lead versus the visitors from Piedmont.  Summer signing Nicolo Zaniolo continued to impress and started the scoring in the 15th minute with a show of skill, style & persistence. From a set piece, the ball found it’s way to the 19-year old, and after his initial shot was blocked, while lying on the ground, he gathered, spinned around and blasted the ball into the roof of the net! The Giallorossi doubled their lead through a penalty from Aleksandar Kolarov after Stephan El Shaarawy was fouled by the Granata goalkeeper Salvatore Sirigu when heading towards goal. The Romans showed their Jekyll & Hyde nature as the away side tied the game up within 15 minutes in the second half. First, Venezuelan international Tomas Rincon with a lovely inside out curling shot and then Christian Ansaldi with a bullet with his left, both from outside the box. The Stadio Olimpico was silenced… They were cheering soon after though, as another young Italian player who has shown his worth this season, Luca Pellegrini set up El Shaarawy, and the former Milan player put the ball past Sirigu on his near post.

The Crociati took the lead in the 11th minute from the penalty spot, after the referee used the VAR to determine that Gervinho had been fouled in the box. Roberto Inglese calmly scored in the bottom left hand of the Frulians goal. The home team pushed but had to wait until the second half to equalize and it was January recruit Stefano Okaka who announced himself to the Udinese Tifosi, scoring with a thumping header after Parma goalkeeper Luigi Sepe had initially saved a shot. Less than 10 minutes through the away side got their second and the game-winning goal and it was that man again Gervinho… Following a clearance off a Udinese corner, the Ivory Coast international raced to the ball overcoming two of the home team’s defenders and the skipped past the goalkeeper to score in an open goal.

This match was played in front of 11,000 plus children at the Guiseppe Meazza as Inter served their second match of the two-game ban after some of their fans racially abused Napoli’s Kalidou Koulibaly. The cheering, noise, and general enthusiasm of the kids in the stands was very impressive, but the play on the field did not match it.  Both teams created a few chances, in particular from the Neroverdi’s Manuel Locatelli and the soon to depart Kevin Prince Boateng, but they did not take it. Special mention must again be paid to the Nerazzurri goalkeeper Samir Handanovic who made some fantastic saves. Il Biscione’s best chances fell to former Sassuolo player Matteo Politano and a header from Lautaro Martinez, but the points were shared in this encounter. Inter have only won once in 10 games against Sassuolo…

A fifth goal from up and coming Italian defender Gianluca Mancini and a beaver-trick from Colombian Duvan Zapata condemned the hosts to a resounding defeat. In just the 11th minutes Mario Pasalic crossed into the box and Mancini rose high to open the scoring for La Dea. It was “Zapata Time” next! It was Pasalic again who was the provider crossing in for Zapata to head home just before the end of the first half. His second was a lovely place finish after collecting a slide rule pass in the box with his left. The best chance for the Lazio based side was from Andrea Pinamonti, but when one-on-one with the goalkeeper, he hit his shot at the keeper and it deflected over the bar. Zapata completed his hat-trick running onto a header into the box – he was quicker to the ball than the defender to score. Finally, he scored his “Poker”, with another header from a cross from the right side of his team’s attack.

A relegation six-pointer shared by the regional rivals… Rodrigo Palacio opened the scoring for the Rossoblu with a scorcher from outside the box that left the home team’s goalkeeper with no chance. Gli Estensi were the better side for the majority of the game and got their equalize in a somewhat familiar fashion, as Manuel Lazzari crossed the ball and Jasmin Kurtic was there to head into the Bologna goal. Spal continued to push for the winner, but none was forthcoming and the match ended 1-1.

The game of the round! Brilliant goals, penalty, red card & a last-second goal….. Oh CALCIO! It was former players of both teams, Luis Muriel for La Viola and Fabio Quagliarella of Sampdoria that took the headlines.

Colombian Muriel opened the scoring with a stunning run coasting past a few Samp defenders to score past a helpless Emilio Audero in goal. The home side were then reduced to 10 men when Edimilson Fernandes was sent off for a horrendous tackle for his second yellow.  On the stroke of half-time, Gaston Ramirez curled in a splendid free-kick that Albon Lafont dove for in vain. Two brilliant goals and still a full 45 minutes to go!

The Tuscans took the lead again, again it was Muriel and again it was a brilliant solo run. He got a pass from Federico Chiesa, back-flick the ball past a Samp defender, dink the ball past another, sprinted towards goal and placed a right footed shot in the corner of the goal. It was time for Quagliarella to put his stamp on the clash with a quick double, first from the penalty spot and then with a goal, when being held back, he used his physical strength to fight off the defender who was all over him. The Ligurians probably thought the win was in the bag, but then in virtually the last second of the match, the home side got the game tieing goal. From a free-kick, the ball was played to Chiesa, he spun and crossed and captain German Pezzella was there to just got enough of a touch to put the ball in the net.

A neutrals dream of a game! 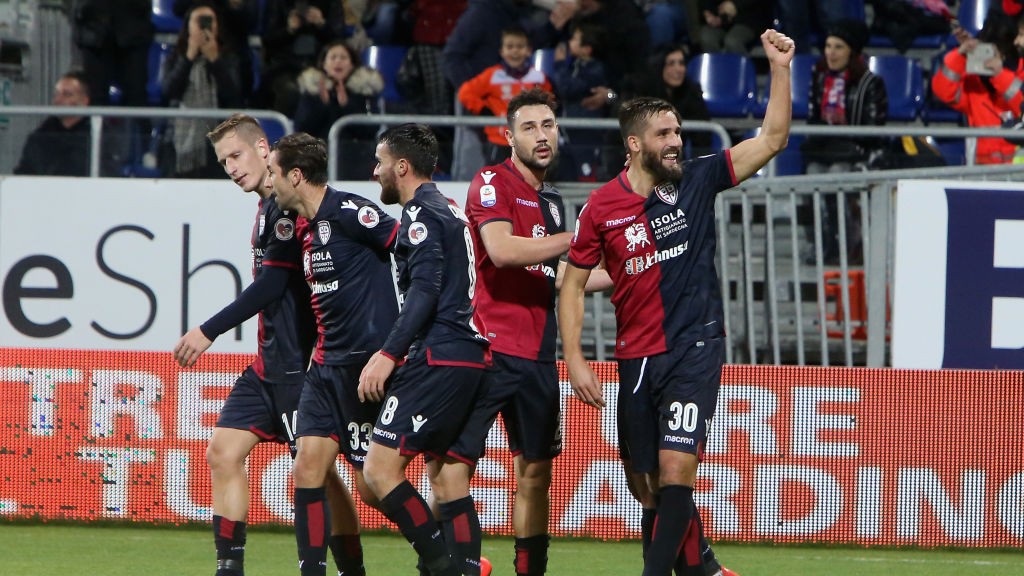 Another match between relegation candidates ended all square. The Sardinians star striker Leonardo Pavoletti scored with another header to give his team the lead. The teams went in as is, but then the Tuscans scored twice within 10 minutes to take a 2-1 lead. First Giovanni Di Lorenzo tapped in the ball from a cross and then Miha Zajc with a lovely run and finish inside the box with a left footed shot. However, the 1969 Scudetto would grab a share of the spoils in stoppage time. A long racking ball was met by Diego Farias, and he clipped the ball past the defender and scored past the goalkeeper on a one on one. 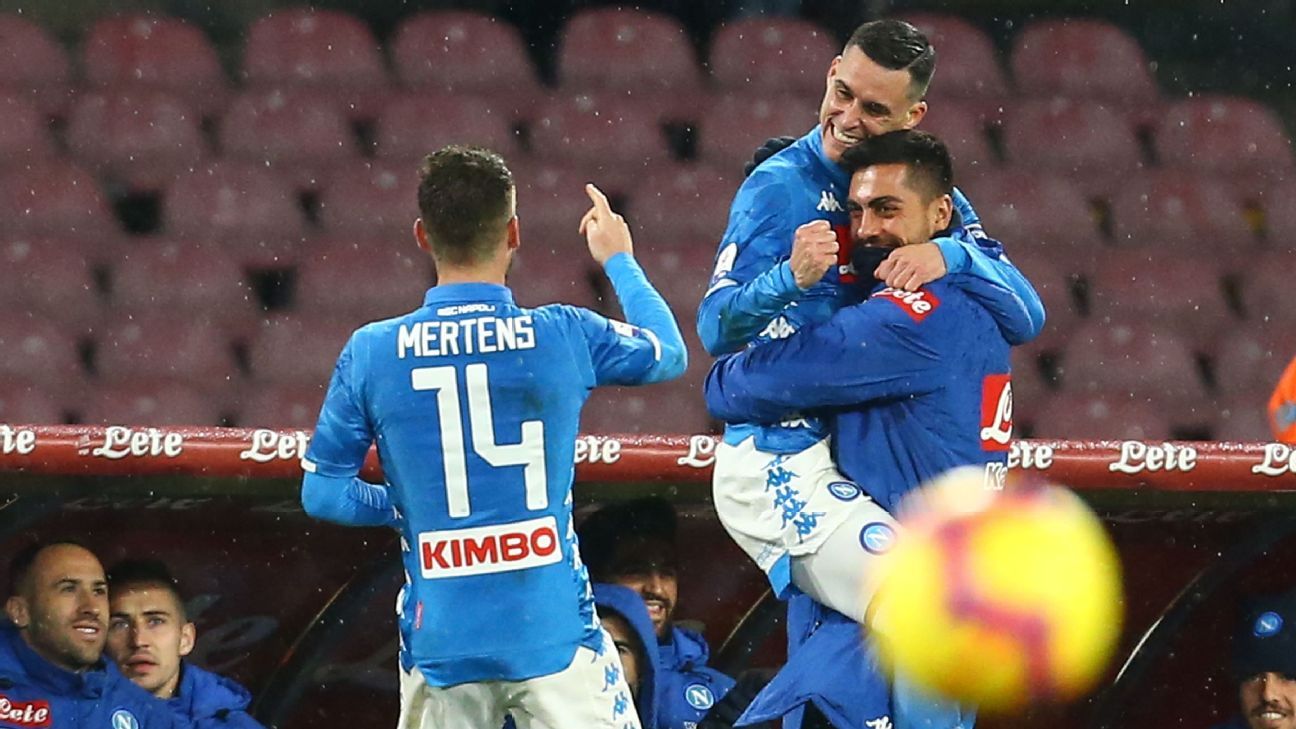 Two first-half goals from Jose Callejon and Arkadiusz Milik gave the Partenopei a vital three points despite missing Kalidou Koulibaly, Allan, Lorenzo Insigne, & Marek Hamsik. Spaniard Callejon had not scored all season, and broke his duck just past the half an hour mark, collecting a pass from Dries Mertens, to power the ball into the Lazio goal. Just three minutes later, Milik scored a brilliant free-kick, of which he is becoming a sort of a specialist. Neapolitan born Ciro Immobile pulled one back for the Biancocelesti, but then they had Francesco Acerbi sent off (meaning he won’t break Javier Zanetti’s consecutive appearance streak). The home team continued to push for more goals and hit the post through Fabian Ruiz, but it ended 2-1. A full match recap can be found here. 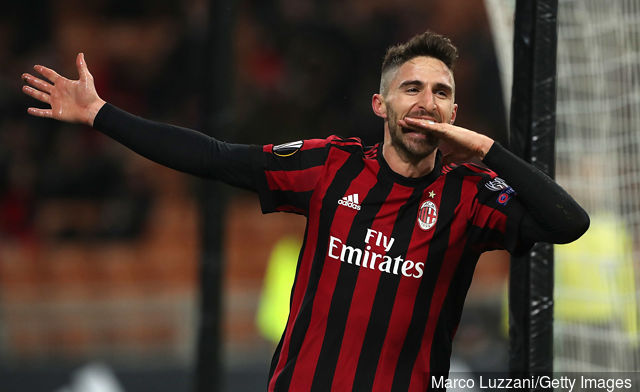 This match was played at the strange time of 15:00 on  Monday as the Rossoneri won to jump back up to 4th place.  The away side were missing several key players including captain Alessio Romagnoli but had to thank Gigio Donnarumma and two second-half goals from Fabio Borini (pictured above) and Suso for the win.  Donnarumma had to save from Mario Bessa twice, while new signing Lucas Paqueta hit the post for Milan with a half volley, as the half ended all square. It was the much-maligned Borini who scored the opener, finishing off a lovely worked move to score inside the box when all alone. The Grifone hit the post through Miguel Veloso, but five minutes later, the Lombardians doubled their lead.  A lovely through ball from Patrick Cutrone found Suso, and the Spanish international sped towards goal and finished with his weaker right foot into the corner of the net.

A routine win for the Bianconerri, as they went back to nine points above Napoli. In just the 13th minute, Douglas Costa was allowed the carry the ball, and he duly placed the ball in the corner of the net. The Flying Donkeys had a good shout for a penalty as Sergio Pellissier appeared to be fouled by Daniele Rugani, but just like in the Supercoppa Italiana last week, the referees did not even use the VAR. Just one minute later and Juve were two in front through Emre Can. The German collected a floating pass from Paulo Dybala and he hit an unstoppable shot past Stefano Sorrentino in the Chievo goal. The home side was then awarded a controversial spot-kick for a handled ball, but Cristiano Ronaldo missed the chance to convert, as Sorrentino saved it. They eventually wrapped up the game for good, when Rugani scored with a header from a set piece with just six minutes to go.

So Serie A returned this past weekend with the usual end to end games, controversy, a few sendings off and plenty of spectacular goals, and if round 20 is anything to go by, we are in for a treat of Calcio in 2019!