Comebacks, a 24-year record tied, and a shock for Bologna that cost Pippo Inzaghi his job were the main talking points in another round of calcio.

The Neroverdi won their first match since the departure of Kevin Prince-Boateng, as Manuel Locatelli, Khouma Babacar & Alessandro Matri grabbed the goals. It was Milan loanee Locatelli who opened the scoring early in the 9th minute, burying a shot into the roof of the net, after Cagliari goalkeeper Alessio Cragno saved from a Domenico Berardi shot. The home team doubled their lead on the stroke of half-time through a penalty awarded with the use of the VAR. The referee adjudged that Filip Duricic had been tripped in the box and Babacar stepped up to calmly convert the spot kick. The Sardinians did not offer much in an attacking sense and had to thank their goalkeeper for the score-line staying respectable. The home side scored their third late on as Alfred Duncan made a brilliant run past a couple of Cagliari defenders and his an outside of the left foot cross into the box, that was met by Matri. Sassuolo continued their hunt for Europe, while Cagliari continues to suffer. 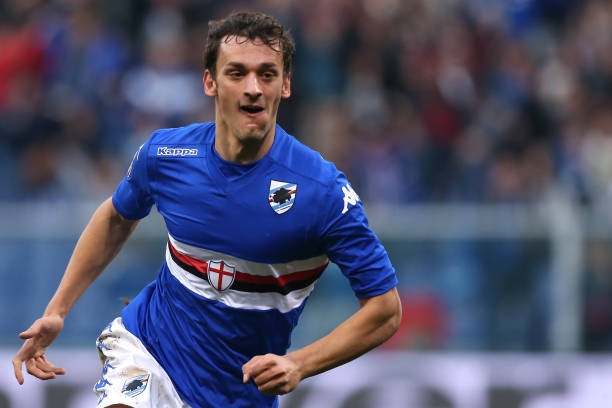 What else to say but… Fabio Quagliarella! The veteran grabbed a brace through two penalties in the 33rd & 56th minutes to give Samp a 2-0 lead in a commanding performance. It meant he tied the record of Fiorentina legend Gabriel Batistuta by scoring in his 11th straight game in the league. The Fruilians misery was further compounded, by goals from Karol Linetty and the returning Manolo Gabbiadini. The Ligurians are just two points off a Champions League place, while the Bianconeri are just four points off the final relegation spot.

A match that was quality all over the pitch except in its finishing… The Rossoneri created the first chance as Hakan Calhanoglu put through Patrick Cutrone, but the 20-year old could only hit the side netting. The home side made of the running in this clash, while the Partenopei were contented to hit on the counter, with their quick passing game. Just into the second half, Franck Kessie missed a guilt edge chance, having a shot from just four yards out that Kevin Malcuit made a last gap stop. Milan had to thank Gigio Donnarumma who again showed his worth, pulling off some smart saves, in particular from  Piotr Zielinski. New Milan recruit Krzysztof Pitatek made his debut and was stopped well by a combination of Davide Ospina & Kalidou Koulibaly late on. Fabian Ruiz was harshly sent off for a second yellow card when the referee called him for a handball. Milan maintains their one-point lead in 4th, while Napoli are now 11 points off the top spot in the league.

Luis Muriel gave La Viola an early lead after finishing off a one-two in the box, by blasting the ball into the roof of the net that gave the home team’s goalkeeper Stefano Sorrentino no chance. The Flying Donkeys hit the post, but it was the away side that scored next through a lovely finish from Marco Benassi from just inside the penalty box, his shot flew into the net. Chievo got one back through Mariusz Stepinski with a bullet header from a cross from the right side. The Veronese came within one of the visitors after Benassi handled the ball on the line, was shown a straight red card and Sergio Pellissier converted the penalty. Then there was a period of about 15 minutes with pure calcio craziness! Firstly, Federico Chiesa hit the post, then scored soon after on the breakaway. Muriel hit the post as well, Chievo were then given a second penalty, that the Tuscans goalkeeper Alban Lafont saved after Pellissier went the same way as the first…Whew…Chiesa scored his second finishing off a cross with a first time shot. There was still time for a Filip Djordjevic goal for Chievo, but it was merely a consolation. It was another spirited performance from Chievo, while Fiorentina’s up and down season continues. A Roberto Inglese brace gave the Crociati a 2-0 lead, and being at home, they would have thought the points were in the bag, however, their regional rivals had other ideas! Gli Estensi struck back with three goals in the space of just 15 minutes to stun their more illustrious opponents. Firstly, Mattia Valoti with a header, then Andrea Petagna with a header of own, tied the game up at the 75th minute. Parma’s issues with defending set pieces reared its ugly head again. The comeback was complete when Mohamed Fares hit a scorching 25 yard left footed shot that left the home team’s goalkeeper Luigi Sepe rooted to his spot. With the win, Spal pull seven points from the drop, while Parma’s hopes for Europe took a serious hit. 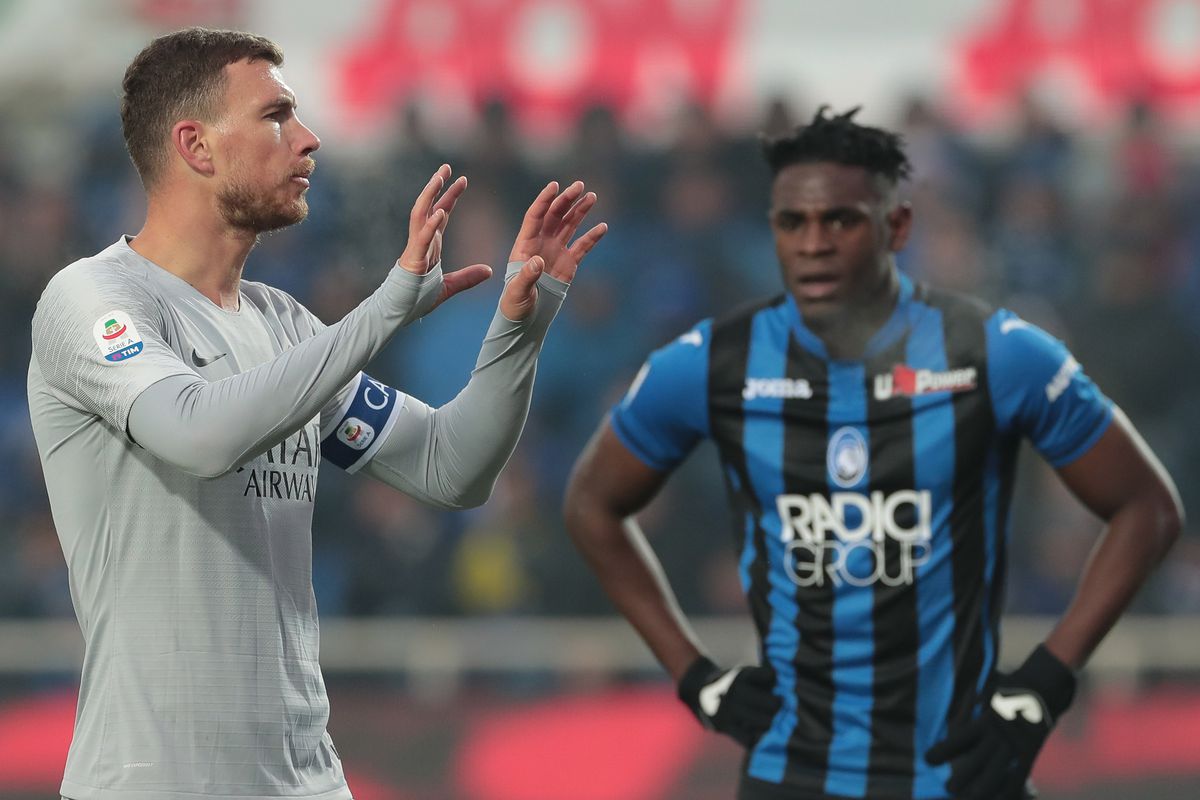 Another comeback in calcio, this one the most incredible of them all, as Roma gave up a 3-0 lead at half-time to Atalanta. The Giallorossi took the lead when Edin Dzeko scored in the league for the first time in three months and he grabbed a double within 30 minutes. His first running onto a chest down from Nicolo Zaniolo and the second on a breakaway one on one. There was more to come from the Romans as Zaniolo got his second assist, setting up Stephan El Shaarawy, who all alone in the penalty area, lifted his shot over the Bergamo side’s goalkeeper. Like the game going on at the same time in Emilia-Romagna, this one in Lombardia also had a great comeback! Just before the first half ended, La Dea got one back, through a Lucas Castagne header, after lovely inter-change between Josep Ilicic & Papu Gomez. It was then defender Rafael Toloi, also with a header, left brought the Bergamaschi within one, when left all alone. It was Zapata time…Firstly, he missed a penalty, after Illicic was shown to be fouled with the use of the VAR skying his effort into row Z, however, he atoned soon after beating Roma keeper Robert Olsen at his near post. What. A. Match. Roma are just two points above Atalanta in the European battle. 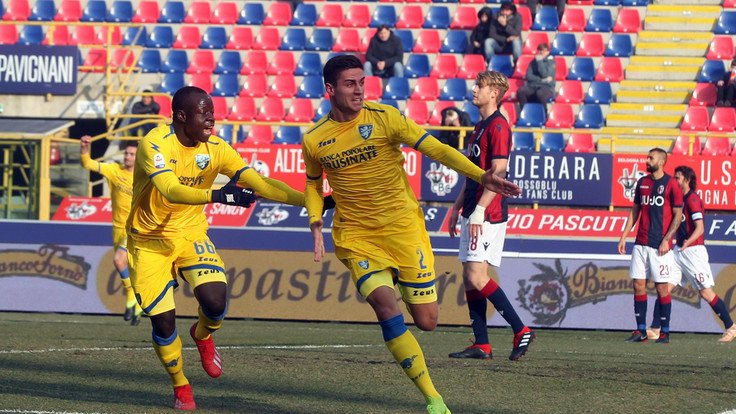 The Rossoblu went down to 10 men in just the 13th minute after Federico Mattiello was shown a straight red. The Lazio based team completely dominated thereafter…Just five minutes after the sending off, Paolo Ghiglione opened the scoring with a header with his first ever Serie A goal. Camillo Ciano then scored a double in either half, first with a volley from a cross and then on a one on one with the goalkeeper running from his own half. In between, Andrea Pinamonti scored after a nice interchange in the box. Bologna’s loss cost manager Fillipo Inzaghi his job, with Sinisa Mihajlovic returning, while Frosinone are just one point behind them now.

Inter created two chances, but poor finishing from Lautaro Martinez and then a smart save from Salvatore Sirigu denying Mauro Icardi, kept the Nerazzurri at bay. Armando Izzo scored the only goal of the game, leaping high to head home a cross that leaped over the Inter defense and into the net. Besides the opening exchanges, il Biscione looked devoid of motivation and invention, and matters were made worse when Matteo Politano was sent off for arguing with the ref. Inter are just five above Milan in third, while the Granata are themselves just five points off a Champions League spot.

The Biancocelesti dominated this match, but a complete lack of composure in front of goal let them down…In the first half, they missed countless chances, including from Marco Parolo, Luis Alberto, Angel Correa, Luca Leiva and Ciro Immobile! The home team could have been up by at least three or four goals by the break, but their finishing lack any sort of conviction, while Juve’s goalkeeper Wojciech Szczesny had some saves to make, and when he did not, his defense came to his rescue. Just before the hour mark, however, Le Aquile did take the lead,  from an Emre Can own goal from an own goal. However, inevitably, La Vecchia Signora struck back with two goals to take home the victory. It was the Portuguese to the rescue, as first Joao Cancelo scored after a Paulo Dybala shot was saved and then he was fouled by Senad Lulic and Cristiano Ronaldo converted the spot kick. Immobile missed another sitter and the match petted out and the Bianconeri escaped by the skin of the teeth. The defending champions are now 11 points clear at the top, while Lazio are three points off 4th spot.

A real relegation six-pointer won by the Grifone…Following the sale of Piatek, others in the Genoa team needed to step up and Christian Kouame did just that, finishing off a long pass over the Tuscans defense with an inside out right footed shot. The home team equalized through Giovanni Di Lorenzo, finishing off a move down the left with a left-foot shot. The Ligurians however, scored a quick-fire double to take the win. Firstly, Darko Lazovic with a lovely curling effort with his left foot, then he provided the cross for new signing Antonio Sanabria to head home. Empoli are just three points off the last relegation spot, while Genoa did themselves a big favour with this win, moving nine points clear.

Another round of Italian football is in the bag, and even it seems the Scudetto is well and truly over,  however, the race for Europe and Serie A survival heats up and should give us plenty of talking points for the rest of the campaign.