Great comebacks involving teams at either end of the table and a race for the fourth and final UEFA Champions League place sums up Matchday 22 of Serie A TIM football.

A real relegation battle kicked off the weekend on Saturday at 3 pm as the Tuscans hosted the Veronese. It was the team in yellow that took a 1-0 lead through Emanuele Giaccherini with a rasping right-footed shot at the 30th-minute mark. Shortly after, they doubled their advantage with a Mariusz Stepinski volley from just four yards out from a corner. Just before the half, the home team got one back from Francesco Caputo as he met a cross to tap it into the goal. The captain scored again just after the re-start, meeting a long ball that went right over the Chievo defense, rounding the goalkeeper, and scoring into an empty net. Empoli are one point above the drop, while Chievo are still rooted to the bottom.

A routine win for the home side at the San Paolo. A double strike within less than two minutes from Arkadiusz Milik and Lorenzo Insigne gave the Partenopei the early advantage. The Pole met a cross first time from Jose Callejon; the local-born lad Insigne turned and shot while inside the box and it went into the right-hand side of the goal. In the second half, Samp pushed forward much more as the home team sat back on their lead and created a few half chances. However, they were able to take any of them and it was the Campanians who scored their third and decisive goal. It came through a penalty – after Joachim Andersen handled the ball from a Piotr Zielinski shot – as substitute Simone Verdi stepped up and converted. Napoli are back to nine points off the top while Samp are still just three off the fourth spot.

A fantastic match from start to finish! The Bianconeri took a 2-0 lead – with two rather scrappy goals – from Cristiano Ronaldo and Daniele Rugani by the hour mark. The Portuguese was falling over but still managed to score as he was slipping to the ground, while Rugani scored from inside the six-yard box with a volley after a cross had been poorly dealt with by the Crociati defense. Game over right? No! Just two minutes later Parma pulled one back through a free header from Antonino Barilla. He met a floating cross from Juraj Kucka and Mattia Perin was left helpless in the Juve goal. La Vecchia Signora took another two-goal lead, and it was Ronaldo again leaping high over a defender to meet a Mario Mandzukic cross. The two time UEFA Cup winners from Emilia-Romagna went through great lengths to get Gervinho and the Ivorian proved why yet again. The former Roma man scored a double to tie the game up, the first, a lovely back-heeled goal from another Kucka cross and the second a right footed shot that flew into the goal after he ran onto a Roberto Inglese cross. What. A. Game. Juve are still firmly heading towards another Scudetto, while Parma’s impressive return to the top flight continues.

Not a great match at all, with the only real significant moments being Nicholas Nkoulou being sent off for the Granata for two bookable offenses and Marco Valoti missing a guilt edge chance for SPAL. The home team are five points above the drop zone while Toro’s hunt for Europe continues.

A goal a piece from either side within 10 minutes of each meant a share of the spoils at the Dacia Arena. There was not much between the sides in the first, but then in the 56th minute, the Fruilians took the lead. Igor Pussetto made a darting run down the left and crossed into an open space where Jens Stryger Larsen was and he placed the ball into the goal. La Viola, however, equalized through a scorching 25-yard shot from Edimilson Fernandes whos shot went right along the ground and into the bottom right-hand corner of the home team’s net. A valuable point for the Bianconeri, while the Tuscans may have these two dropped points come back to haunt them.

The Neroverdi took the lead with a lovely worked goal that was finished off by Filip Djuricic inside the Grifone penalty box. Just before the end of the first half, the home team equalized and it was new signing Antonio Sanabria who grabbed the goal. The January signing has started life in Liguria in great fashion, as after scoring versus Empoli last Monday, he doubled his tally with a nice turn and finish. Both teams did not create much after and the match petted out into a draw. Sassuolo are six points above Genoa in the standings.

The pressure on Nerazzurri manager Luciano Spalletti continued to rise as after having being knocked out of the Coppa Italia by Lazio, his team lost again at home. The Rossoblu hired Sinisa Mihajlovic to replace Pippo Inzaghi and his methods had an immediate impact, as his team were the much better side. They pressed the home team high up the park, not allowing them any space and time to move the ball forward, were quick in their own passing and movement going forward and just generally dominated Il Biscione. They took the lead through Federico Santander with a header from a corner and they would not relinquish the advantage no matter what Inter tried at the Guiseppe Meazza. The home team did look a better side in the second but were wasteful in front of goal especially Lautaro Martinez who continues to disappoint. Matias Vecino and makeshift center forward Andrea Rannocchia also spurned decent opportunities. Inter are just four points ahead of the chasing pack, while if Bologna can continue like this, there is no reason, they can’t avoid the drop.

A point for each, but regret from both as it could have been all three for either side at the Stadio Olimpico… The Rossoneri took the lead and it was their January signings that combined, as Lucas Paqueta won the ball off Lorenzo Pellegrini, raced towards the box and crossed the ball to Krzysztof Piatek before he beat the entire Giallorossi defense to the ball. The away side kept the lead until the break and had goalkeeper Gigio Donnarumma to thank, with a stunning double save from Patrick Schick and Edin Dzeko. However, he could nothing to prevent the home team’s equalizer just at the start of the second half. A cross from Rick Karsdorp took a wicked deflection of Bakayoko and while Donnarumma used his reflexes to stop it, the rebound fell kindly for Nicolo Zaniolo and he smashed the ball home. A few minutes later another controversial decision went against the seven-time European champions. Aleksandar Kolarov appeared to have clearly pushed Suso in the box, the referee Maresca gave nothing, there was no use of the VAR, nothing! Ridiculous… After that, the Romans were the better side and nearly stole the points as Pellegrini had a header that hit the post with Donnarumma rooted to his spot. Diego Laxalt also had a good chance to win it for Milan,  but when all alone in the box, he hit a very weak shot that Robert Olsen saved comfortably. Milan are just holding onto that last crucial UEFA Champions League spot, with Roma one point behind.

A regional Derby was won by the Biancocelesti over their hosts at the Stadio Benito Stirpe… It was Lazio who made most of the early running, while the home team were content to just hit on the break. The two-time Scudetto winners took the lead through Felipe Caicedo, after being sent through by Luis Alberto, the Ecuadorian hit a thumping left-footed into the near post. In the second half, the away side sat back and allowed the team in yellow to have the lion’s share of possession and they were nearly made to pay for that. First Andrea Pinamonti missed a sitter being given the ball with time and space but hit his shot way over the bar from just 12-yards out. Another chance fell to Frosinone, this time from Marcelo Trotta but Thomas Strakosha – the hero from Lazio’s Coppa Italia win in the penalty shoot-out – saved it with his legs, to secure the points for his team. Lazio are tied with arch-rivals Roma on 35 points. 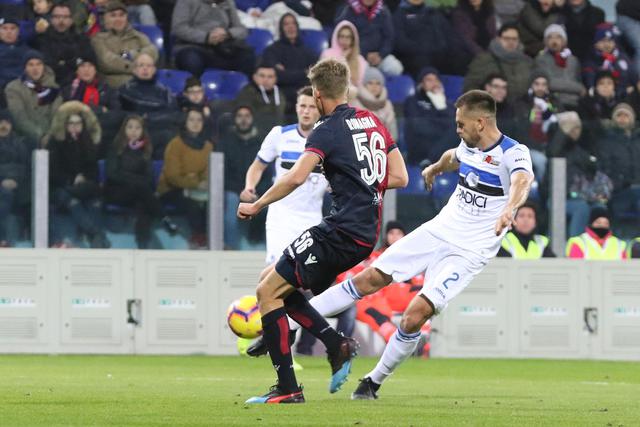 The last game of the round was won by La Dea with a Han Hateboer header. Both teams played to win this one, in a fairly open game, and both teams had chances in the first half. The deadlock was broken by the Dutchman in the 50th minute as he rose high to head home a cross. The Sardinians had a couple of chances to score after with Luciano Pavoletti hitting the post with a header and he also missed from close range after meeting a cross from Joao Pedro. A great result for the Bergamaschi following on from destroying Juventus in the Coppa Italia, while Cagliari are just four points above the relegation zone.

Another exciting round of Serie A football has ended and the closest fights seem to be for the last UEFA Champions League spot and the last relegation spot.