A variety of three goals maintained  Juventus’ march towards an eighth successive Scudetto. In just the 5th minute, Paulo Dybala collected a pass from Cristiano Ronaldo, and the Argentine unleashed a 30-yard scorcher to give the home team the lead. The second scored by Leonardo Bonucci was a bit scrappy; Mario Mandzukic headed a ball towards goal, the goalkeeper saved it, but the Inter youth product was there to score the loose ball. Ronaldo got his name on the score sheet, meeting a Mandzukic cross to power the ball into the net. A routine win as the Bianconeri heads to Spain to face Atletico Madrid in the Champions League, while Frosinone are five points from safety. A second-half double from Leonardo Pavoletti led the Sardinian comeback. The Crociati took the lead through a looping Juraj Kucka header just before the half time interval. After the break, the home team pressed home the agenda and were rewarded. Just after the hour mark, Pavoletti got his first, meeting a cross to score from close range. He doubled his tally and gave his team the win with a typical headed finish from a Nicolo Barella cross. Joao Pedro got sent off for arguing with the ref, but the result was confirmed. Cagliari gave their survival hopes a massive boost, while Parma’s strange season back continues…

A highly entertaining match was won by the Rossoneri. Both teams traded chances before La Dea took the lead through Remo Freuler. After brilliant footwork from Josip Ilicic inside the box, he crossed the ball and the Swiss player met it with a right footed shot that Gigio Donnarumma could do nothing about. With virtually the last kick of the half, Milan equalized and what a goal it was! A cross from Ricardo Rodriguez was met by Polish poacher Krzysztof Piatek with a quite stunning strike; he managed to shoot the ball on the volley over the covering defender and into the far corner of the net! Il Diavolo then scored twice within five minutes to take home the three points. First, Hakan Calhanoglu with a rasping shot just outside the box followed by Piatek with a header off a corner. With this victory, Milan remains in the fourth and final Champions League place.

A controversial but correct call proved decisive in this match. Just after the half-hour mark, the home team took the lead through Andrea Petagna, with a volley inside the box. La Viola’s equalizer was a stunner, as Edimilson Fernandes continued his goal-scoring form, with an unstoppable left-footed strike from 20-yards out to send the teams tied at the break. THEN, the moment of the match came… Federico Chiesa was tripped in the box – nothing was given – and Gli Estensi ran up the field and scored through Marco Valoti. The referee, however, was alerted by the VAR office to check the replays. Following this, he awarded a penalty to the Tuscans and took back the home team’s goal. Jordan Veretout converted the spot kick to put Fiorentina up 2-1, while Spal protested ferociously… Fiorentina added further strikes from Giovanni Simeone and Gerson to compound matters for the Emilia-Romagna side. Fiorentina continued the fight for a European spot, while SPAL are just four points above the drop zone.

A late goal gave the Frulians a much needed win at home. Both teams created several chances, but neither could take them wisely and it was down to the awarding of a controversial penalty that broke the deadlock. The referee adjudged that a Chievo defender handled the ball when he went up for a header and pointed to the spot. Lukasz Teodorczyk took the penalty – it was saved – but he was there to put home the rebound. Udinese are now four points above relegation, while the Flying Donkeys remain rooted at the bottom of the league.

Another come from behind win by a home team this weekend. The Biancoclesti took the lead with a well-worked move at the end of the first half, as a one-two between Ciro Immobile and Milan Badelj was finished off by the Croatian. The Grifone pushed much more in the second half and tied the game up through January recruit Antonio Sanabria, who continued his fine form since joining the club. The Ligurian side’s winner came late – very late – as captain Domenico Criscito hit a low powerful drive just outside the box that rifled into the left hand of the Lazio goal. A much needed win for Genoa to pull away from the drop, while Lazio’s top four hopes took a hit.

A dominant performance from the Tuscans over the Neroverdi… A double strike within five minutes gave the home team the lead. The first was a coast to coast finish from Bosnian Rade Krunic. He went past several Sassuolo defenders before chipping the goalkeeper. The second was created by Diego Farias as he ran past the defender, squared the ball to Afriyie Acquah and the Ghanian neatly placed the ball into the far corner of the goal. Farias himself got his name on the score-sheet, with a counter-attack just at the hour mark. Empoli moved three points clear of the last relegation place, while Sassuolo stays mid-table.

A much-needed win for the Nerazzurri with Mauro Icardi watching in the stands… The first half action was summed up by Sampdoria goalkeeper Emil Audero allowing an Ivan Perisic effort to go under him and nearly go into the goal, but he managed to stop it before it crossed the line. The game was defined by a five-minute spell in the second half… Il Biscione took the lead through Danilo D’Ambrosio, when the right back met a Perisic cross to score from just  three yards out. The Blucerchiati then tied it up with a Manolo Gabbiandini finish inside the box, with his first touch coming on as a substitute. Lastly, Radja Nainggolan slammed a right footed effort into the net that left Audero motionless. Inter strengthened their Champions League status, while Samp’s hopes faded.

Another wasted opportunity by the Partenopei means that the Scudetto is likely gone for good now… In fairness, the Granata’s defensive organization must be applauded, but Napoli’s chances that fell to Lorenzo Insigne (who hit the post), Arkadiusz Milik, and Jose Callejon, needed to be taken for them to keep their faint hopes of a title tilt alive. Napoli sit comfortably in second place, while Toro can continue to fight for Europe. 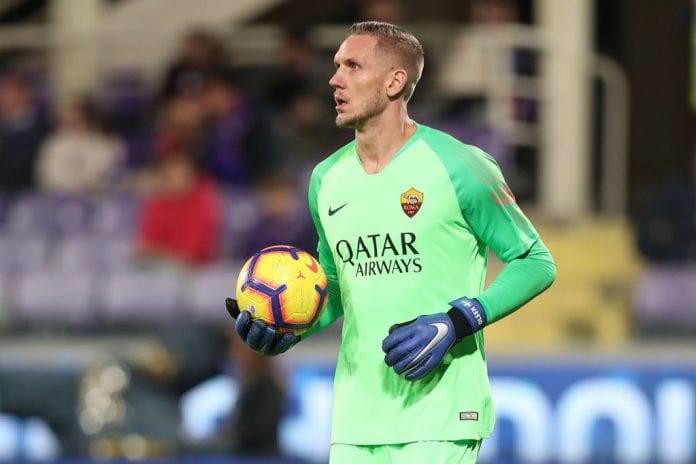 The Giallorossi won this encounter and they had the man in the above photo – Robert Olsen – to thank… The Swedish shot-stopper saved just about everything thrown at him by the Rossoblu. In the first half, he stopped Roberto Soriano twice (who also hit the post). Early in the second, a well-worked move involving Stephan El Shaarawy and Edin Dzeko, resulted in a penalty after the Italian was brought down by two Bologna defenders; Aleksandar Kolarov stepped up and converted the spot kick. I Lupi doubled their lead when defender Federico Fazio scored from a corner when left all alone in the box. Bologna finally got on the scoresheet when Nicola Sansone scored, but it was merely a consolation, as Olsen again pulled off some stunning saves in the second half. Last year’s semi-finalists are just one point behind Milan for fourth place, while Bologna’s revival under Sinisa Mihajlovic has come to a stop.

We still have 14 rounds of Calcio left, but the Serie A race is definitely over for sure, while the teams fighting for the European places continued to jostle for places and the relegation race may have just taken a significant turn. European action continues with Juve, Inter, Lazio & Napoli all in action.