Juventus and Napoli maintain their dominance, the fight for Europe tightens, and the teams at the bottom of the table all drop points in another exciting, goal-filled, and controversial round of calcio.

Three second-half goals sealed a comfortable win for the Rossoneri. Milan created a couple of chances in the first half, but Samu Castillejo forced the Tuscan goalkeeper into a fantastic save and Lucas Paqueta’s header was ruled out for being offside. However, after the break, the home team were not to be denied. A lovely worked goal was finished off by Krzysztof Piatek from a Hakan Calhanoglu pass. Just 90 seconds later, it was two as Castillejo went pass two Empoli defenders and threaded the ball to Franck Kessie who chipped the goalkeeper. The Spanish forward got his name on the score-sheet himself, placing a first time shot into the goal at the near post from an Andrea Conti cross. Milan maintains their top four status, while Empoli stays three points above the relegation zone. 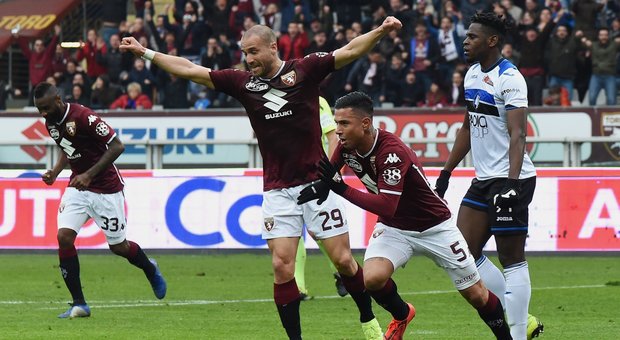 Like the Friday night encounter, this match in Piedmont also had the home team winning with second-half goals. The first half was mostly dominated by La Dea, but they could not turn that into an advantage. They were made to pay for this as the Granata scored a quickfire double on either side of the interval. Armando Izzo got the first in the 42′, scoring from a volleyed rebound after the Atalanta defense failed to properly clear a corner. Following this, barely a minute into the second half, the home side had scored another securing all three points. Soualiho Meite made a run down the left flank, crossed the ball the Bergamaschi’s penalty area – Andrea Belotti left it for Iago Falque  – and the Spaniard scored easily into the net. Both teams are now tied on 38 points – in seventh place – in the Serie A TIM. 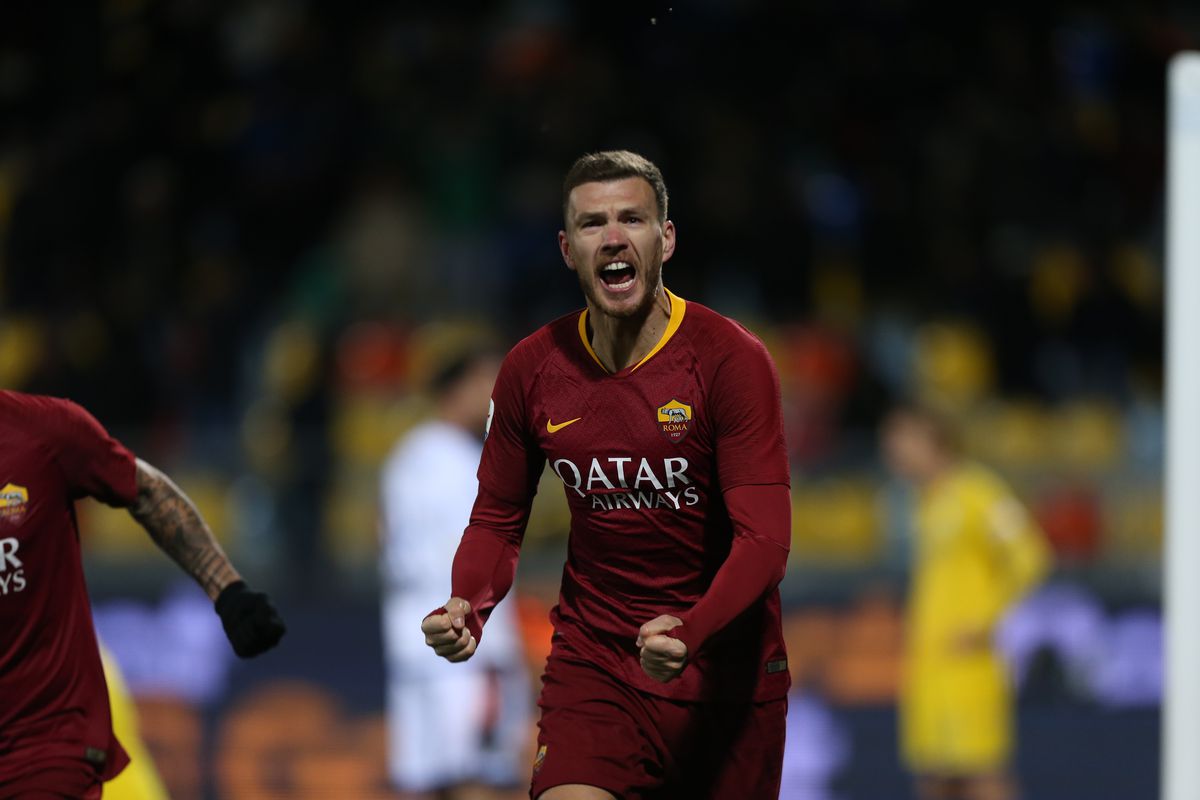 What a match between regional rivals… The home team took the lead after a misplaced pass from Steven N’Zonzi that was picked up by Camillo Ciano. He hit a low drive that was saved by Robert Olsen in the Giallorossi goal, but somehow, it bubbled into the goal. At the half-hour mark, the away team struck twice to take the lead. First Edin Dzeko pounced on a lack of concentration from a Frosinone defender to place the ball into the net with a right-footed effort and then on the break Lorenzo Pellegrini scored with a sliding finish from a Stephan El Shaarawy cross. Roma barely got out of first gear and were made to pay for it when the Canarini equalized. On the counter, a combination play between Andrea Pinamonti and Ciano was finished off by the Inter loanee. Il Lupi, however, picked up the pace and scored when Edin Dzeko finished off an El Shaarawy cross with the last kick – or should I say “belly” – of the game. Roma stays just one point off Milan, while Frosinone will be bitterly disappointed at how they threw away this result. 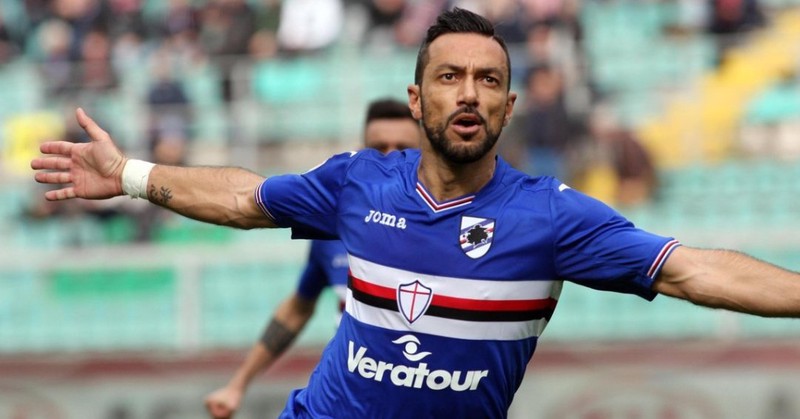 A return to form from Samp…The Ligurians dominated most of this match and missed a few chances in the first half, but could not convert. It took a second-half penalty from Fabio Quagliarella to break the deadlock. A cross came in and the referee adjudged the foul in the penalty box. Before the spot kick was taken, there was a some “gamesmanship” from the Sardinian goalkeeper Alessio Cragno towards “Quags.” However, the Neapolitan maintained his concentration, scored, but shouted towards Cragno as he raced towards the Curva Sud to celebrate with the Tifosi. A little scuffle insued thereafter… Despite a drop in form, Samp are just nine points off a Champions League place, while the Isolani are in 14th spot.

A share of the spoils… The Neroverdi took the lead just before the interval, as Federico Peluso scored with a lovely left-footed volley from a Stefano Sensi free-kick. The visitors equalized when the referee with the use of the VAR deemed a foul on Sergio Floccari was enough for a penalty, and Andrea Petagna converted. Alfred Duncan was sent off late on as the match petted out. Sassoulo stays in the mid-table while Spal gains a valuable point in their Serie A TIM survival fight.

A dour encounter ended scoreless with little action… The closest we came to a goal was a flicked header from a Chievo corner, that the Grifone goalkeeper Ionata Radu stopped followed by a Christian Kouame header for the Ligurians off a corner. Genoa stays mid-table while the Flying Donkeys are just playing out the season until their inevitable relegation.

Another poor performance, but a win nonetheless from La Vecchia Signora… The Rossoblu created a few good chances in the first half, but poor finishing from Federico Santander, Nicola Sansone, and Edera meant the teams headed into the break at 0-0. It was more of the same as Ibrahima Mbaye had a shot blocked from just six yards out by Alex Sandro from a corner. The defending champions made the home team suffer for that, as a Blaise Matuidi cross was not cleared and Paulo Dyabla was there to score from inside the box. Another fortunate win for Juve following the disaster against Atletico in Europe, while Bologna will need to improve on their finishing if they are to stay in the top flight.

A commanding performance from the Partenopei with two goals in either half gave them the win… The first was scored by Piotr Zielinski – after a lovely one-two between him and Elseid Hysaj – with a right-footed finish in the far corner. His fellow Pole Arkadiusz Milik doubled the team’s advantage with a cheeky free-kick, placing the ball under the Crociati wall. The striker doubled his tally, as after Parma gave the ball away, he hit an inside out shot into the far corner. The fourth was a thing of beauty as the substitutes Simone Verdi and Adam Ounas combined and it was the latter that finished off the play. Napoli won’t catch Juve, but they maintained “the best of the rest” status, while the Crusaders are now closer to the drop than Europe. 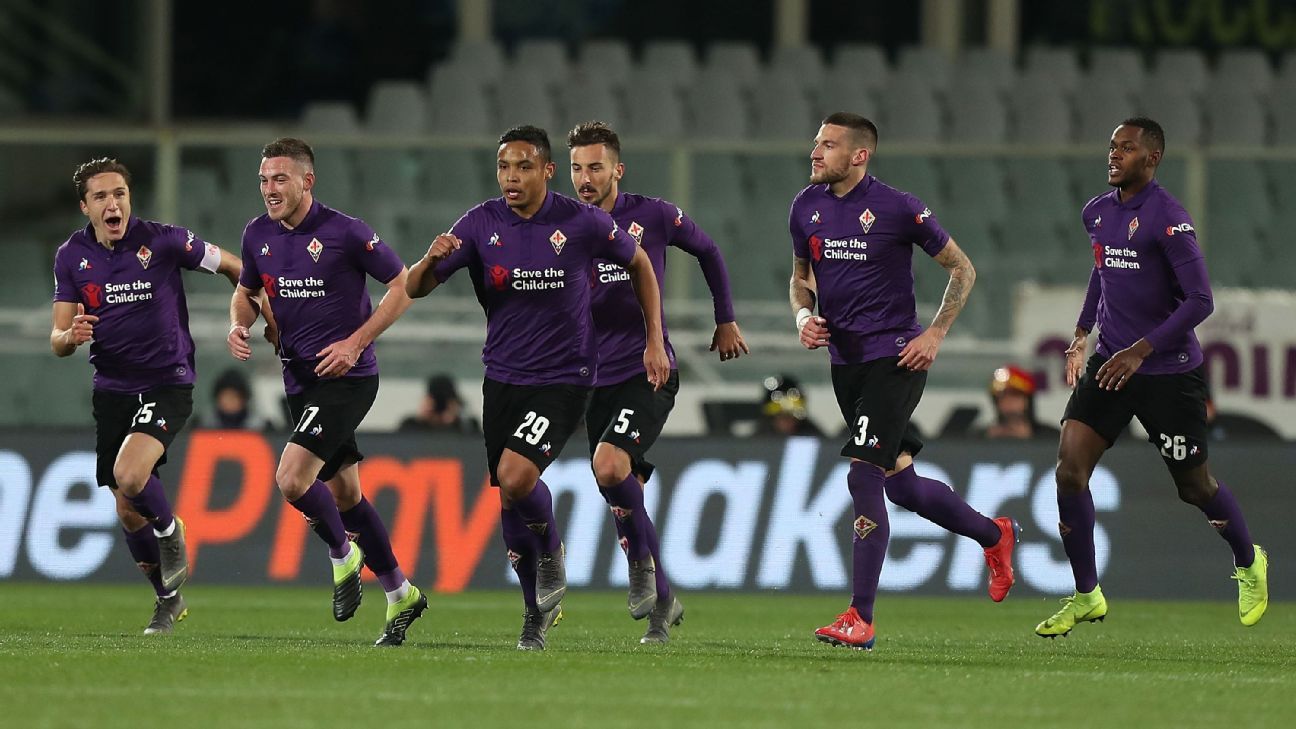 A controversial and thrilling end to this match with the points shared… La Viola took the lead after just 16 seconds when a Federico Chiesa cross went off Inter defender Stefan De Vrij and into his net for an own goal. The Nerazzurri tied it up through former Fiorentina player Matias Vecino, as the Uruguayan hit a right-footed volley from a Radja Nainggolan floated ball. The Lombardians took the lead soon after, as Matteo Politano collected a ball on the right and did the rest. He held onto the ball, saw there were no options, went past his defender and hit a rasping shot with his favored left foot. In the second, Il Biscione got a two-goal advantage, as with the use of the VAR, they were awarded a penalty after Edimilson Fernandes handled in the box and Ivan Perisic scored. Christian Biraghi scored a scorcher for the home team, but it was ruled out for a foul in the box.

However, the Tuscans did fight back! A Luis Muriel blast of a free-kick from 35 yards out brought his team within one goal with 10 minutes to go. THEN, controversy! In the 7th minute of stoppage time, Chiesa crossed, it hit Danilo D’Ambrosio on his chest, and the referee pointed to the spot. However, he was alerted by the VAR and he adjudged that the ball caught the arm on the way down and Jordan Veretout converted the spot kick… The Inter players were incensed and we have not heard the last of this yet. Inter are just one point above Milan, while Fiorentina are not out of the Champions League race just yet.

Another round of Italian football in the books and we now look forward to the Coppa Italia semi-finals this week with Lazio vs Milan and Fiorentina vs Atalanta.