The race for the UEFA Champions League tightens, a gap opening up in the fight for survival and a hilarious Derby d’Italia choreography highlighted Matchday 34 of the Serie A TIM.

A comeback win for the Rossoblu… The Tuscans took the lead against the run of play in the 17th minute, as Marko Pajac scored from a tight angle to beat the Bologna goalkeeper at his near post. However, the home team struck three minutes after the interval to win the game in this relegation six-pointer. Firstly, two January signings combined, as Nicolo Sansone crossed into the box and Roberto Soriano was there to head the game tieing goal. Riccardo Orsolini then scored with a ferocious shot after moving the ball forwards 10 yards to send the ball into the roof of the goal. Sansone then got a well-deserved goal, finishing off a counter-attack to seal the three points. Bologna sits eight points above the drop, which is currently occupied by Empoli. 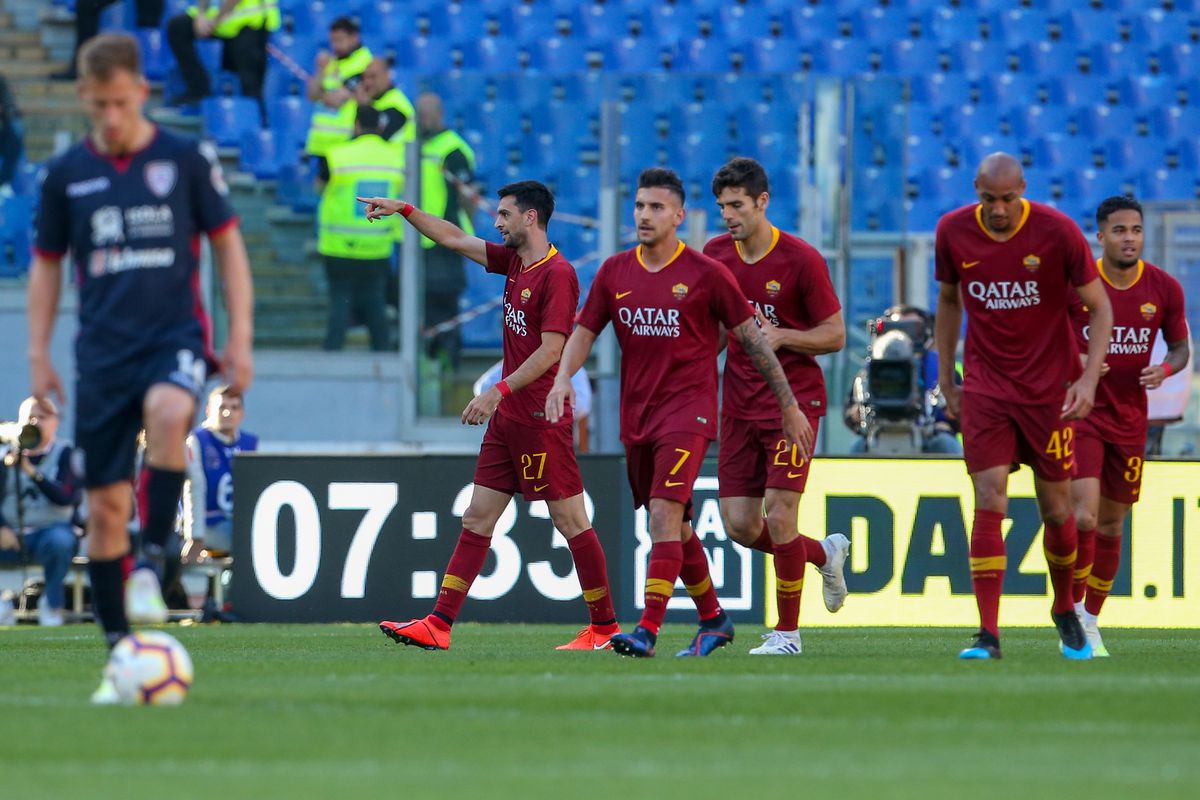 The Giallorossi hitting form at just the right time… Before the 10th minute, the home team raced into a two-goal lead, through a Federico Fazio header from a corner and then a well-placed shot from the forgotten man at Trigoria, Javier Pastore. The Sardinians seem to be safe for another year, and it showed as they barely made a mark in this game. No surprise Roma scored another, as Alexander Kolarov scored late on after his teammates had two attempts at goal. Roma are one point off fourth, while Cagliari are settled mid-table. All squared in the Derby d Italia… Before kick-off, the Inter Ultras unveiled the above banner mocking their arch-rivals continued failure in the European Cup. The Nerazzurri were the better team early on and took the lead with a Radja Nainggolan 25-yard volley that stunned the Bianconeri goalkeeper. The home team continued creating chances, but Wojciech Szczesny saved from a Mauro Icardi left footed shot and a Stefan De Vrij header from the resulting corner. Inevitably the eight-time successive Scudetto winners found their game and equalized through Cristiano Ronaldo, after a neat one-two with Miralim Pjanic. Juve took control of possession after that, and both teams created a few chances, but the match petted out as a draw. Inter continued their march to the UEFA Champions League, while Juve’s manager Massimiliano Allegri said he will use the remaining matches to test out different tactics.

A comfortable win for the Partenopei… The away side dominated this encounter from start to finish and opened the scoring with a sumptuous free-kick from Dries Mertens at the 20th minute. They doubled their lead through Amin Younes, who combined nicely with Arkadiusz Milik to finish off the move inside the box.  The home team created nothing of note. Frosinone are that step closer to a return to Serie B, while Napoli maintains their “best of the rest” status.

A goal in either half meant a share of the spoils… Juraj Kucka scored a with a header from a free-kick to give the Crociati a deserved lead. 20 minutes into the second half the Flying Donkeys equalized with a header as well as Riccardo Meggiorini flicked a cross into the goal. Both club’s status has already been established for next year.

A valuable point for both club’s Serie A survival… The home team took the lead through a Felipe header from a corner after a good period of play. Less than 10 minutes after the break, the Grifone tied the game up with a scuffed shot from Gianluca Lapadula. The only other chance of note was a Jasmin Kurtic header that was cleared off the line for Spal. Both teams should be safe at this point.

A vital win for the Biancocelesti in this European tussle… A double strike by Felipe Caicedo put the away side firmly in control. Firstly, with a lovely counter-attack, he calmly finished with a left-footed strike and then powered home a header from a Romulo cross. Samp went down to 10 men after Gaston Ramirez was sent off for a second bookable offense. Romulo hit the post for Lazio, but then Fabio Quagliarella pulled one back for the Ligurians just before the hour mark. Both teams hit the post thereafter as Nicola Murru with a rasping left-footed drive that hit the goalkeeper after hitting the post and almost went into the net and then Ciro Immobile thrashed the uprights with a thunderous free-kick. Samp nearly equalized late on but Gregoire Defrel missed from just three yards out. Samp’s European hopes are hanging by a thread, while Lazio are just four points off fourth.

A first win over the Rossoneri for the Granata in 17 years… The first half was a bruising encounter as both teams played very physical, with the best chances created by Milan, with a Suso shot and a Hakan Calhanoglu close-range effort, both comfortably saved by Salvatore Sirigu. The Piedmont side scored twice within 10 minutes to seal the points. Andrea Belotti continued his recent good form, converted a penalty after Armando Izzo was fouled by Franck Kessie and Alejandro Berenguer with a bullet shot after Matteo Musacchio failed to clear the ball properly that fell to the Spaniard. Bakayoko nearly scored twice with headers for the visitors, but that was as close as the visitors came. Both teams are now tied on 56 points, three off the last Champions League position.

La Dea continued their brilliant recent run… Robin Gosens had a header saved in the first half as the home team made most of the running in Bergamo. The Friulians nearly took the lead in the second half, as Rodrigo De Paul curled a lovely effort, only to see it hit the post. The Bergamaschi did get their goals and it was a double strike late on. Firstly, a Martin de Roon penalty and then a Mario Pasalic shot that took a deflection and went over Juan Musso in the Udinese goal. Atalanta are all alone in fourth, while Udinese are four points above the drop zone.

The Neroverdi controlled this match and took a deserved lead through a Domenico Berardi strike after he collected a pass from Italy teammate Stefano Sensi. La Viola had the chance to tie the game up just before the interval, but Jordan Veretout had his spot kick saved by Andrea Consigli in the Sassuolo goal. The home team upped their game in the second half and came closest through Federico Chiesa and Luis Muriel, while Sassuolo were denied a second by the closest of margins of off-side with the use of the VAR. With the win, Sassuolo jumped over Fiorentina by one point in the standings.

We are entering the final month of the calendar, with the UEFA Champions League race heating up, but the last relegation spot may have taken a decisive turn…