All square in the Derby della Mole… This match meant a lot for Torino and it showed as they opened the scoring in just the 16th minute; Sasa Lukic pressed Miralem Pjanic as he headed back towards his own goal, stole the ball away from the Bosnian and hit a lovely shot into the far corner of the goal. The Bianconeri’s best chance in the first half was a Blaise Matudi shot that was easily saved by Salvatore Sirigu in the Granata goal. The home team did eventually equalize and inevitably it was Cristiano Ronaldo who got the goal, as he leaped high to meet a Leonardo Spinazzola cross with less than 10 minutes to go. A good point for Torino in the UEFA Champions League ambitions.

A commanding away win for Gli Estensi… Spal defender Felipe scored with a well-placed header in just the eighth minute to get the party going for the Ferrara side. That it was just the one goal lead was a minor miracle as the teams headed to the break. The away team however, scored three times to wrap up the points and mathematically seal their Serie A TIM status for another season. Jasmin Kurtic was at the heart of it all, as he set up Sergio Floccari just after the interval and got a goal himself in the 81st and in between Felipe got a brace. Spal with the win confirmed a second consecutive season in Calcio’s top flight after not being in Serie A for 52 years.

The Nerazzurri created the first real chance at the Dacia Arena through Radja Nainggolan with a shot that the Friulian goalkeeper Juan Musso had to dive full stretch to stop in the 15th minute. Both teams continued to spar with each other without really creating anything of note and they headed level at the break. The away side were the ones really trying to take the game to the opposition, while Udinese were keeping their defense solid and tried to hit on the break. Both teams had decent shouts for penalty kicks, but the match petted out. Udinese are two points above the drop zone, while Inter’s qualification for Europe should be a mere formality. 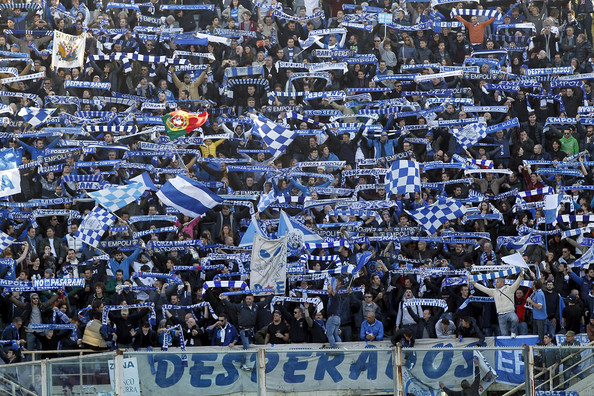 A narrow win for the home team in this Tuscan Derby… This result owed much to the continued impressive performance of Empoli’s Polish man between the sticks, Bartlomiej Dragowski, ironically on loan from La Viola. In the first half, he dived spectacularly to save from Giovanni Simeone from a bicycle kick. Alban Lafont also had his fair share of saves to make, including a kick save early on in the second half from a Rade Krunic following a lovely flowing move for the home team. The lone goal came soon after as Diego Farias rose over his marker to head home. Federico Chiesa came on for Vincenzo Montella’s side, but no equalizer was forthcoming. Jordan Veretout got a red card for protesting at the referee after the final whistle. Empoli still occupies the last relegation spot, while Fiorentina just needs the season to end as soon as possible.

La Dea continued their march towards the Champions League, while conversely Lazio’s hopes may have been dashed… It started well for the home team as Marco Parolo scored early with a left footed shot after the ball had bounced around in the Atalanta box. The away side got back in the match through Duvan Zapata, after the Colombian was left all alone inside the penalty box and calmly slotted the ball into the net.  The Bergamaschi took control of the game and took the lead early on in the second half, as Timothy Castagne guided the ball into the net after Papu Gomez crossed the ball that went right across the Biancocelesti penalty area. Gomez had taken the ball off Wallace and things got worse for the Brazilian, as he scored an own goal with 15 minutes to go and Atalanta had the win. Atalanta are three points clear in fourth place, while Lazio are seven behind. 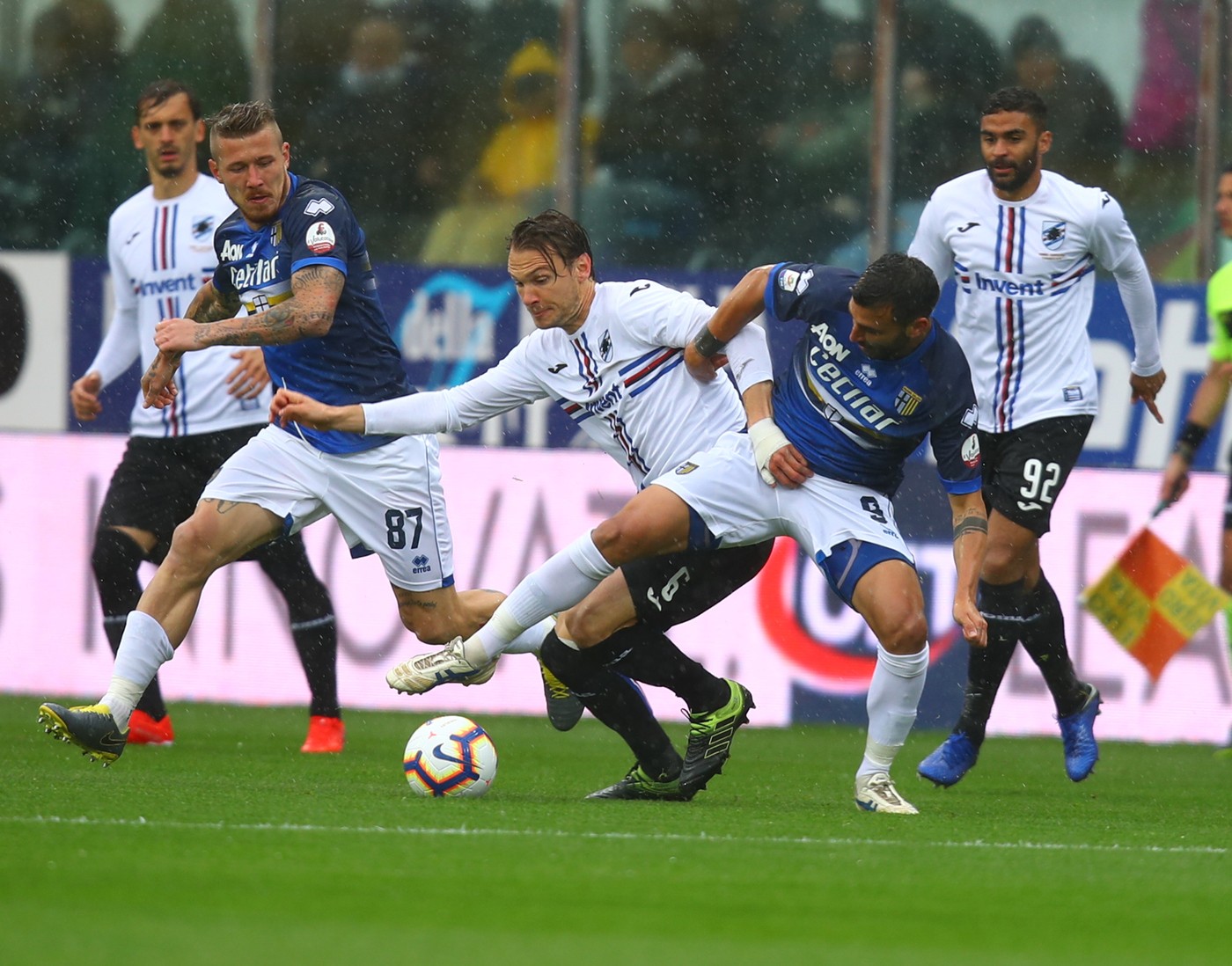 An exciting game between these twinned clubs… The Crociati scored in just the second minute as Marcello Gazzola tapped in after good work by Gervinho on the wing. Samp equalized through a Fabio Quagliarella penalty and the away side took the lead heading into the half-time break as Gregoire Defrel scored off a rebound. At the hour mark, Quagliarella completed his brace after being sent through by Dennis Praet to give his team a two-goal lead. However, the Emilia-Romagna side tied the game up with a double strike in the space of four minutes; Firstly, Juraj Kucka with a spot-kick and then Alessandro Bastoni tapped in after Emil Audero made a save that fell into his path and the Italy Under-21 international hit a first time shot into the goal. Both teams ended the match with 10 men as Omar Colley for Samp and Kucka for Parma were both shown red cards late on. Both teams are basically just settled in mid-table right now. 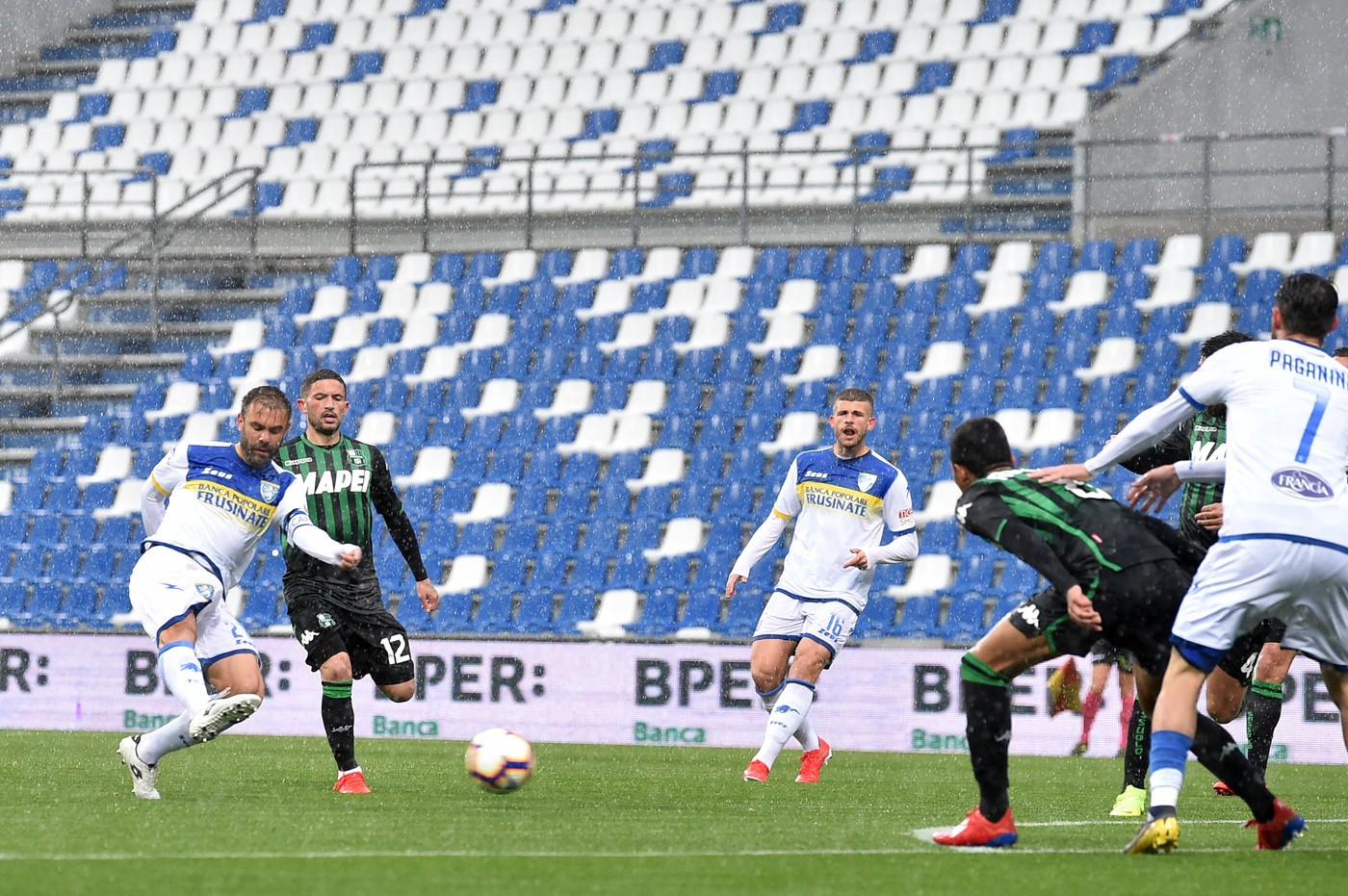 Sassuolo fought back from two goals to tie this game… Paolo Sammarco opened the scoring with a lovely daisy cutter finish in just the eighth minute. Both teams had one-on-ones to score, as Domenico Berardi hit the post for the Neroverdi and Andrea Pinamonti had his shot saved by Andrea Consigli for the Lazio based team. The away side did double their lead with a Luca Paganini header from a corner late on in the first half. 20 minutes after the break, Sassuolo started the comeback with a scuffed shot from Gian Marco Ferrari and completed the turnaround, as Jeremie Boga guided home a Pol Lirola cross. Sassuolo stays mid-table, while Frosinone are officially relegated to Serie B.

Late drama in Liguria… The Grifone missed a few close shaves in the first half, while Federico Fazio had a header saved by the home side’s goalkeeper Andrei Radu as the teams ended scoreless at the break. With less than 10 minutes to go, it was former Genoa player Stephan El Shaarawy who gave the Giallarossi the lead with a first-time volley along the ground from a cross. However, in stoppage time, almost an incredible victory for Genoa! Firstly, Cristian Romero tied the game up with a header and then Antonio Sanabria missed a penalty after Antonio Mirante had fouled the Paraguayan. A point does neither team any good, as Genoa are still fighting for their Serie A status, while Roma are three points off the Champions League.

Late goals gave the Partenopei the win at home… Neither team created anything of note in the first half, but that all changed in the second. It was the Casteddu that took a shock lead with a lovely worked goal. Alessandro Deiola won the back, passed it forward to Nicolo Barella, the young starlet made a back-heel pass to Italy teammate Leonardo Pavoletti and the striker hit a first time shot into the corner of the goal. After that, it was all the home team as Piotr Zielinski with a long-range effort and Dries Mertens with a header forced the ever-improving Alessio Cragno into some fine saves. However, with less than five minutes remaining the 24-year old was beaten twice as the home team grabbed the win. Firstly Mertens scored with a header as he ghosted in unmarked in the box and then Lorenzo Insigne scored a penalty with virtually the last kick of the game. Napoli will finish in second place, while the Sardinians should be safe, as they are eight points above the drop zone. 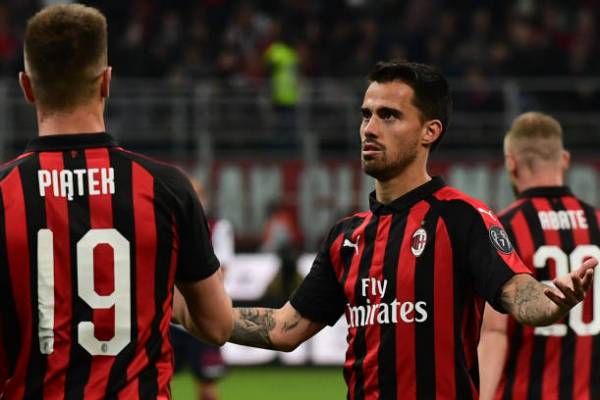 A vital win for Milan for their European ambitions… The Rossoneri created a couple of early chances, but Hakan Calhanoglu’s shot was well saved by the Rossoblu goalkeeper and both Krzysztof Piatek and Cristian Zapata missed headers. On the other end, Gigio Donnarumma saved a shot brilliantly from Riccardo Orsolini after the Juve loanee had beat Ricardo Rodriguez on the wing. It was the home team that took the lead through an individual goal from Suso, as the Spanish attacker took on several Bologna defenders and slotted the ball into the net from just outside the box. The seven times European champions doubled their lead in the second half, as substitute Fabio Borini scored after a Lucas Paqueta shot was saved. Less than five minutes though, the away side got one back, as Nicola Sansone picked out an un-marked Mattia Destro, who collected the ball and turned the ball into the goal. Both teams were reduced in manpower as Milan had Paqueta sent off after an argument with the referee after being tackled by Erick Pulgar, while Bologna had Sansone sent off for a second yellow card and had Mitchell Dijks shown a straight red after the final whistle. Milan are three points off Atalanta, while, Bologna are five points above the drop zone.