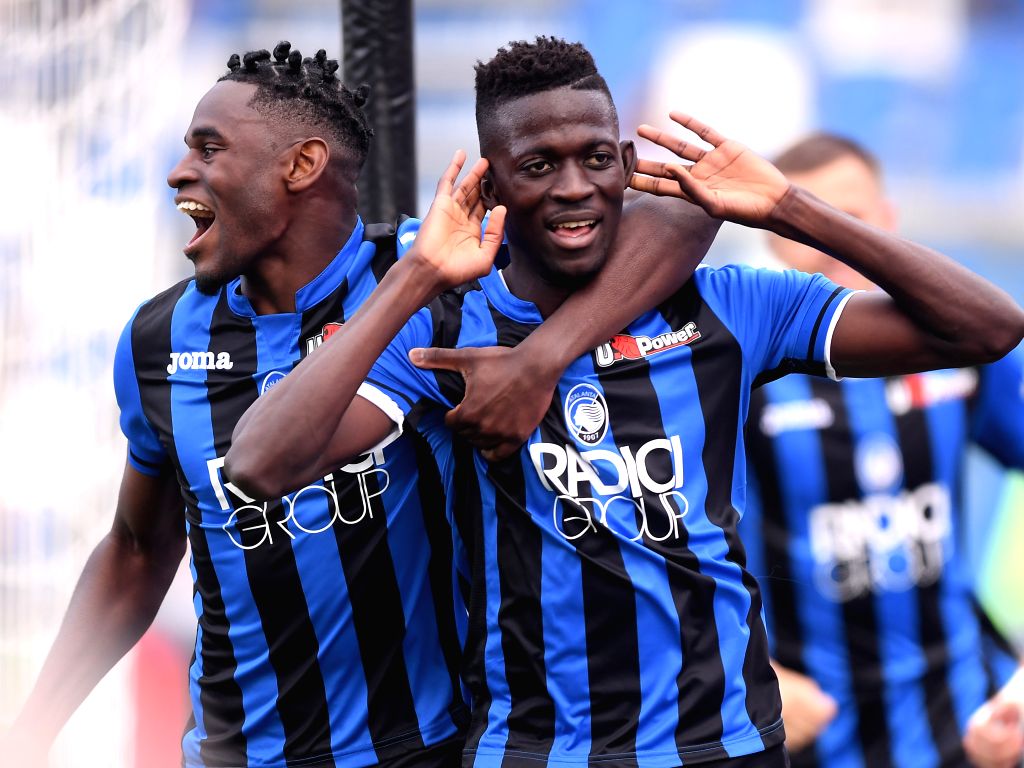 All the goals in this encounter came in the second half, as La Dea continued their march to the UEFA Champions League… Marten de Roon played in Musa Barrow, and Gambian did the rest scoring into the Grifone goal, although the away side goalkeeper got a hand to it. Five minutes later and the Nerazzurri doubled their lead, as Berat Djimsiti played the ball across the goal and it was met by Timothy Castagne to tap home. Goran Pandev got a goal back late, but it was a mere consolation. Atalanta maintained their three-point lead in fourth, while Genoa are just one point above the drop zone.

A dominant performance from the Biancocelesti in Sardinia… They opened the scoring at the half-hour mark with a well-worked play on the edge of the Cagliari penalty area, that was finished off by Luis Alberto. The Spaniard then turned provider, sending Joaquin Correa through, he went past his marker and placed the ball past Alessio Cragno’s left hand. The home team got a goal from a Leonardo Pavoletti header late on, but just like Genoa’s goal, it was also just a consolation. Cagliari are comfortably in mid-table, while Lazio are four points off fourth. 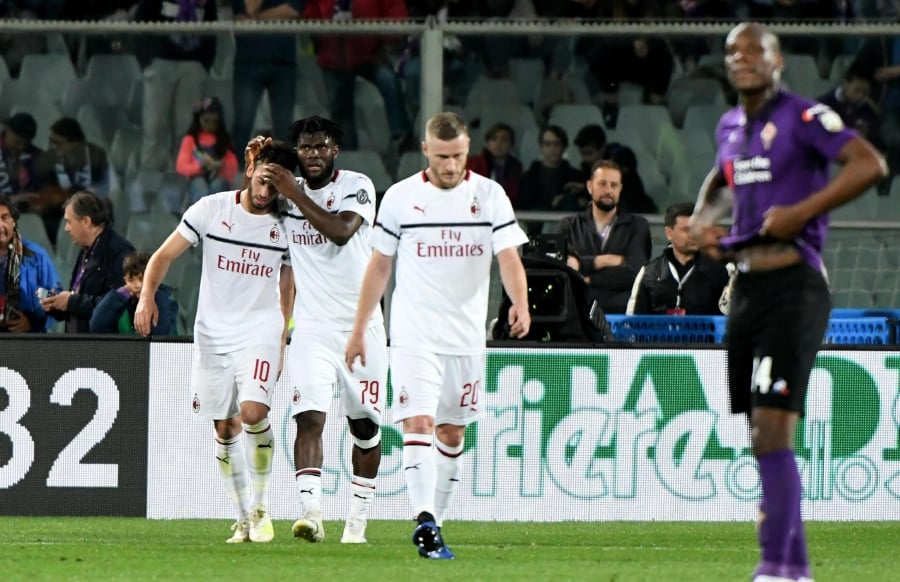 Milan barely remained in the hunt for the top four…Suso had the first chance, but he shot straight at the La Viola goalkeeper from 10 yards out, however, the 25-year old made up for that, providing an inch-perfect cross to Hakan Calhanoglu, and the Turk glance the ball into the net. After the break, the home team were the much better side and came closest as Kevin Mirallas forced a save from Gigio Donnarumma at his near post. Federico Chiesa also forced his Italy teammate into a sprawling save as well, but the Rossoneri held on for the victory. Fiorentina are in free-fall, while Milan kept their hopes alive of a top-four finish.

The game of the round! The Granata twice came back from behind to win this game at home… Firstly though, Andrea Belotti hit a spot-kick against the crossbar, after the use of the VAR awarded the home team a penalty. Soon after it was the Neroverdi that took the lead, as Mehdi Bourabia hit a low drive from 25 yards out, however, he was sent off soon after; the ref deemed that him raising his shirt above his head to celebrate was a bookable offense and he was off. The teams headed to the interval, but there was much more to come in the second half. Belotti attempted a bicycle kick, but it was well saved by Andrea Consigli in the away team’s goal. The Toro skipper would not be denied though as he finished off neatly from a Lorenzo De Silvestri cross 10 minutes into the second half. Incredibly, it was 10 man Sassuolo that took the lead again, after brilliant work from Jeremie Boga, whose shot was initially saved, however, Pol Lirola back-heeled the ball into the net. Again, the home team fought back and it was Simone Zaza who equalized, with a well-placed shot from his favored left foot, after a slide rule pass from Meite. Not even 90 seconds had passed and the Piedmont club had a winner, and what a goal it was; again Di Silvestri crossed, and again Belotti scored, but this time, it was his second overhead attempt, but unlike the first time, Consigli had no answer to “Il Gallo” and the ball bulged the net. Torino are five points off a Champions League spot, while Sassuolo are comfortably in mid-table. 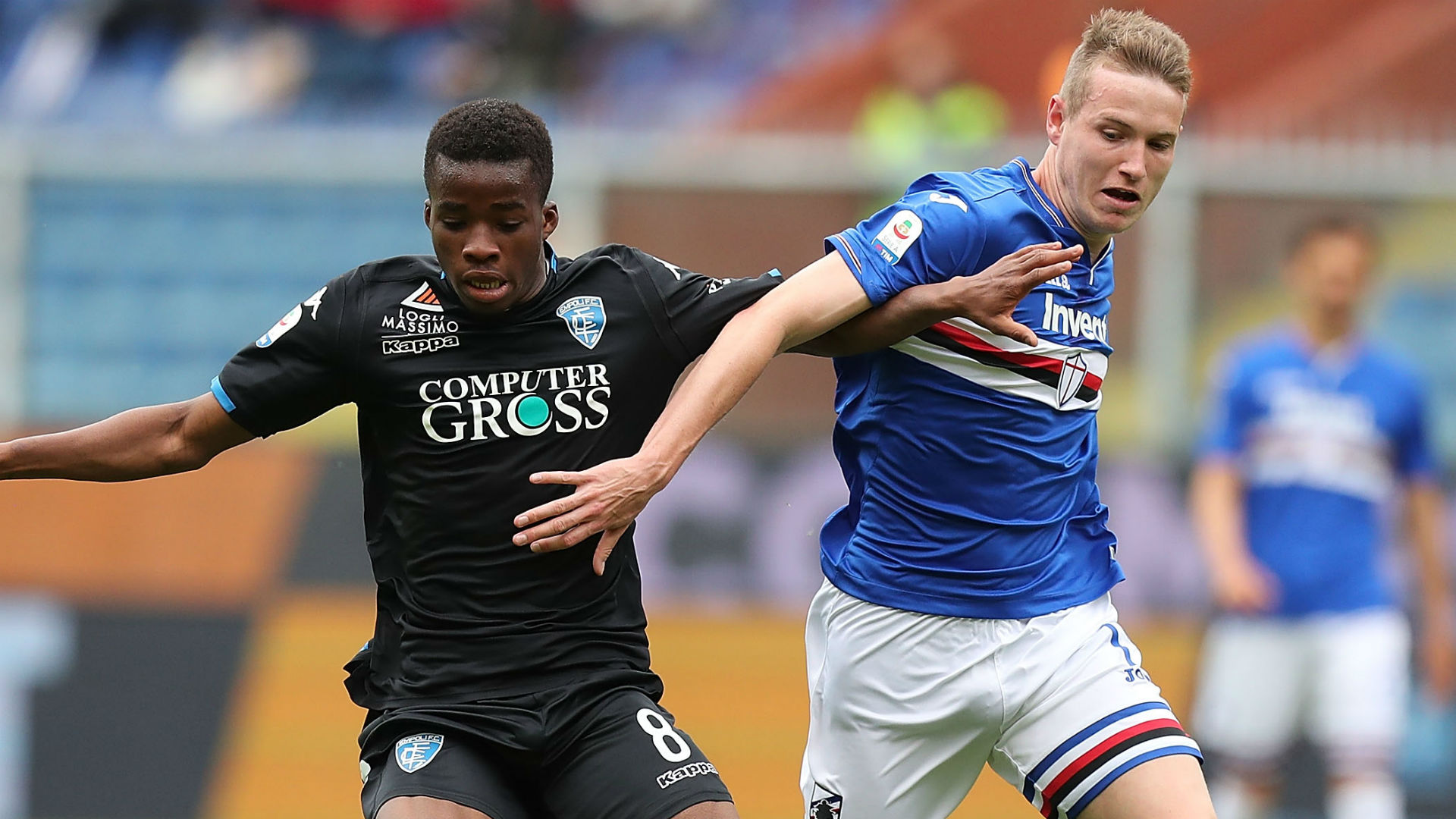 Massive win for the Tuscans… All the goals came in the second half, but not before Francesco Caputo had hit the post for Empoli in the early exchanges. The away side took the lead after a Samp giveaway; Hamed Traore played a lovely one-two with Diego Farias, and he fed the Brazilian who was left all alone to tap home. He then won his side a penalty, after he was fouled by Lorenzo Tonelli, Caputo stepped up, his shot was saved, however, Giovanni Di Lorenzo was there to score the rebound. Fabio Quagliarella scored a penalty late on, but it mattered little. Samp’s European hopes are well and truly over, while Empoli are still in the final relegation spot, but just one point behind the 17th place team. The Friulians took care of business in their battle to avoid the drop… It was the Stefano Okaka’s show, as the former Italy international scored a fine solo goal in just the 11th minute of play, ghosting past several of the home team’s defenders, before powering the ball into the net. The away side scored two more just before the half, firstly Samir headed home and then Okaka tapped into the goal, after being set up by Kevin Lasagna. Frosinone got a late consolation from Federico Dionisi. Frosinone are already down to Serie B, while Udinese are a couple of points above the drop.

Another game where the goals came in the second half… Arkadiusz Milik did the hit the post in the first half, but it was his Brazilian teammate Allan that opened the Partenopei’s account, curling a shot into the top left hand of the goal from inside the box. With less than 10 minutes remaining, the home team tied the game after Andrea Petagna converted a spot kick, however, Napoli would not be denied a victory. They created a wonderfully worked goal, between Milik, Jose Callejon and Mario Rui, and it was the Portuguese that finished off the move. Spal safety was confirmed last week, while Napoli maintain a 10 point gap above third place.

The Giallorossi stayed very much in the hunt for the top four… The home team’s goalkeeper Antonio Mirante kept them in the game with a brilliant save from Paulo Dybala after he was well set up by Cristiano Ronaldo. Roma’s best chance in the first half, was when Lorenzo Pellegrini hit the cross-bar from a counter-attack. In the second, it was clear that I Lupi were the ones more interested in a win and they duly took the lead late on; their captain on the day Alessandro Florenzi played a one two with Edin Dzeko and the Italian international chipped the onrushing Juventus goalkeeper. In stoppage time, they sealed the points on the counter, as Cengiz Under played Dzeko through and the Bosnian side-footed the ball into the goal. Juve’s players are definitely ready for their holidays, while Roma are tied with Milan in fifth. A dominant display from the Rossoblu in this Emilia-Romagna Derby… Like so many games this weekend, all the goals came in the second half. The home sides first came just seven minutes after the break, after a brilliantly worked move that was calmly finished off by Riccardo Orsolini inside the penalty area. The second soon came, as Erick Pulgar took a direct free-kick, which Sepe in the Crociati goal failed to stop (he was unfortunately faulted with an own goal). The away side went down to 10 mean after captain Bruno Alves was sent off after first fouling Orsolini, arguing with the referee and then pulling on the Italy Under-21 attacker’s shirt, while he lay on the ground. Soon after, Lyanco scored with a header from a corner and although Roberto Inglese scored for Parma, with 10 minutes remaining, there was no comeback. Bologna scored a fourth, as Pulgar charged towards goal and took a shot that deflected off Francisco Sierralta for an own goal. Bologna leapfrogged their regional rivals by two points in the standings, while Parma are just three above the drop.

A clinical win for il Biscione… It was Matteo Politano, arguably their player of the season who got the home team the lead, collecting a rebound and placing the ball in the corner of the goal. It was more of the same in the second half, as Ivan Perisic missed two glorious chances to score in a short space of time, first with a volley after the Flying Donkeys goalkeeper saved from Politano and then, after being put through by Radja Nainggolan, his shot was saved again. The Croatian did eventually get his name on the score-sheet; nice combination play on the right between Antonio Candreva and Cedric Soares, the right back hit the post, the ball found its way to Perisic and he slotted the ball into the net. The win should seal Inter’s Champions League participation.