After two rounds of Serie A calcio, there are only three teams with maximum points: Juventus, Inter, and Torino.

In the first home match for manager Sinisa Mihajlovic, the Rossoblu grabbed a late winner to remain unbeaten in the start of the new campaign. The home team carried most of the play, but it was not until into stoppage time that they made their dominance count. Tricky winger Riccardo Orsolini played in a floated cross into the box and Roberto Soriano rose high to power his header into the corner. Three points to take to the international break, while Spal have lost both their games so far.

There was just a single strike in this encounter and it came in the 12th minute of play, as Suso drove past his defender from his right-wing position, crossed to an un-marked Hakan Calhanoglu, and the Turk headed the ball downwards and into the goal. Both teams created chances with the away side forcing the Rossoneri goalkeeper Gigio Donnarumma into a couple of sprawling saves. The home team hit the post through Lucas Paqueta and Polish striker Krzysztof Piatek hit the goalkeeper from close range. Both teams have one win and one loss to start the campaign.

A thriller in Turin… La Vechia Signora raced into a 2-0 lead before the 20th minute and new boy Danilo finished off a fast counter-attack and the returning Gonzalo Higuain rolled back the years with a quite sumptuous strike and the home side carried that advantage to the break. Both clubs traded blows in the first 15 minutes after the break, but it was the Bianconeri that tripled their advantage as Cristiano Ronaldo scored his first of the season with a left footed effort. This game however was far from over! The Partenopei leveled matters and it was three of their summer recruits that came to the rescue. Defender Kostas Manolas with a header, Hirving Lozano with a neat first time finish and right back Giovanni di Lorenzo with a scrambled goal that just went past the goalkeeper. A quite incredible comeback from the away side. However, there would be a cruel twist of fate, as star defender Kalidou Koulibaly scored an own goal in stoppage time when he miscued a clearance into his own net. Another “game of the season” candidate. 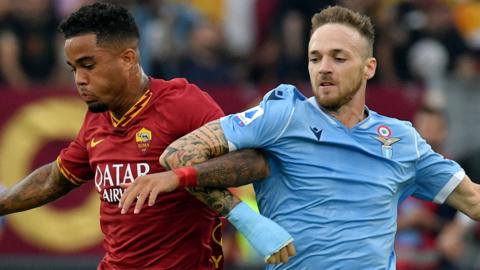 End to end stuff in the Derby della Capitale, where quite frankly, the goalposts were the main talking points… Firstly, Lucas Leiva for the designated “home team” and then Nicolo Zaniolo for the Giallorossi hit the wood work within five minutes of the start. There would be a goal in the opening half and it came courtesy of a penalty, as Aleksandar Kolarov converted the spot kick, after Sergej Milinkovic-Savic had handled in the box. Then the Biancocelesti hit the post twice more in the first half through Ciro Immobile and Joaquin Correa efforts, while Milinkovic-Savic cleared off the line late on. Yet again though, the post played a role as Zaniolo again his the frame of the goal! il Aquile equalised early in the second half, after good work from Immobile set up the Spaniard and he powered his right footed shot past a crowd of Roma defenders and into the goal. Then Lazio came closest to getting all three points as Joaquin Correa had his shot saved from point blank range by Pau Lopez and the Argentine later set up Marco Parolo inside the box, but yet again, the post denied them. Whew… 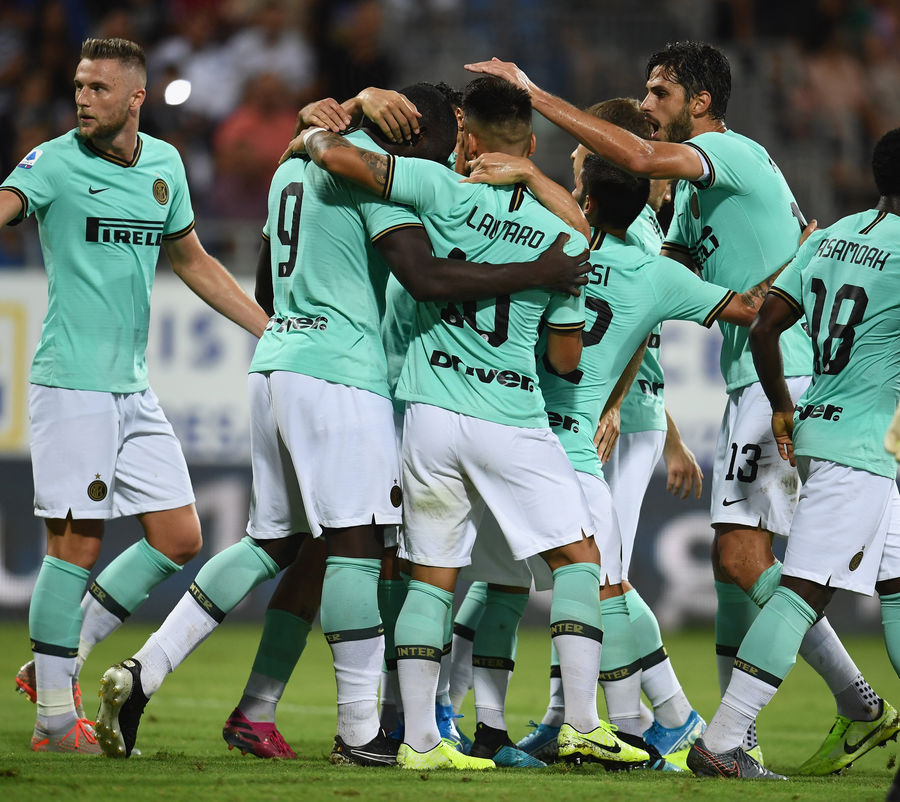 A match that will sadly be remembered for non-footballing reasons… The Nerazzurri took the lead through Lautaro Martinez, as the Argentine headed home from a cross. Inter were the better side, but it was the home team that got the next goal, as just after the break, Joao Pedro headed a cross at the 50th minute to tie the game up. Stefano Sensi was an influential figure in the encounter and it was his decisive play that won the day. The midfield dynamo was fouled in the box and il Biscione were given a spot kick. However, as striker Romelu Lukaku placed the ball and was getting ready to take the penalty, it was evident that the home fans were shouting racist words and chants at the Belgium international. The 26-year old had the last word as he gave his team the lead and they took all three points back to Lombardy. THE FIGC NEEDS TO ACT ON THIS AND TAKE ACTION!

Back and forth match at the Ennio Tardini in Parma… The Granata were the better of the teams in the opening exchanges and deservedly took the lead with a powerful header from Kevin Bonifazi in the 24th minute. However star striker Duvan Zapata scored twice to give La Dea the lead; firstly with a first time finish after being played in by Mario Pasalic and then the Colombian used his brute strength and skill to go past his covering defender to score with his right foot. However, the Piedmont side struck twice in the space of 10 minutes to take home the win. Firstly Alejandro Berenguer played a neat one-two with Soualiho Meite and finished off the move himself. Then Armando Izzo met a free-kick and being all alone scored from four yards out. Both teams hit the post in the opening exchanges in this clash at the Marassi, until summer recruit Cristian Zapata rose high to meet a cross in the 11th minute to give the home side the advantage. It was another Christian that would double the Grifone’s lead and this time it was Christian Kouame with a lovely finish on the edge of the box. La Viola pulled one back through an Erick Pulgar penalty, with still 15 minutes remaining, but there was no comeback for the Tuscans and the Ligurians had all  three points.

The Friulians took the lead with a Kevin Lasagna strike, as the Italy international ran on to a long pass from the back to power home the ball into the net. However, the Crociati struck three times to take the win back home to the Emilia-Romagna region. Firstly Gervinho ran onto a slide rule ball to tie the game up on the stroke of half-time and at the hour mark, the away side took the lead through Riccardo Gagliolo with a header. Both goals were set up by Swedish midfielder Dejan Kulusevski. With less than 15 minutes to go, Gervinho set up strike partner Roberto Inglese to seal the win.

A fairly entertaining encounter by the promoted sides which was won late on by the away side… It was Marco Pessina with the only strike as he met a dummied pass and slotted the ball home against his former side. The home side tried as hard as they could, but no goals were forthcoming in their return to the top flight.

A hat-trick from the supremely talented but inconsistent Domenico Berardi gave the Neroverdi the win at the Mapei stadium. His first came after great work from new boy Francesco Caputo on the left who played a perfect pass to the 25-year old who slide the ball home with a first time finish. His second came courtesy of a header from an Alfred Duncan cross and his third came on the stroke of the interval, with a brilliant shot from 25 yards out with a left footed curler. Samp were reduced to 10 men when Rolando Viera was shown a straight red card for a foul and the home side scored a fourth just after the restart from Hamed Traore. The Ligurians got a consolation from a Fabio Quagliarella spot kick.

As we head into the first international break on the season, the rest of the league has a lot work to do when play resumes in less than two weeks time.