Three rounds of Serie A have now passed, with Inter the only club with full points and Sampdoria the only club that have not managed to obtain anything.

Fiorentina dominated the match, but could not make it count. The best chance in the first half, fell to left-back Dalbert, but his header was well stopped by Bianconeri goalkeeper Wojciech Szczesny. La Viola continued to carry the play versus La Vecchia Signora, but no breakthrough came and the match ended scoreless.

Double for Dries Mertens… The Belgian opened his account with a first time finish past Emil Audero in the Samp goal from a Giovanni Di Lorenzo cross. The Partenopei dominated the encounter, and duly completed the victory with another Mertens goal, as another first time finish, this time from a Fernando Llorente pass.

A single Stefano Sensi strike on the stoke of half-time gave the Nerazzurri a third win from their opening three games. The 5 ft 6 inches of Sensi rose high and met a Diego Godin cross that left the Udinese defense helpless. 10 minutes earlier, the away side saw Rodrigo de Paul sent off, for lashing out at Antonio Candreva. It was Sensi who came closest to scoring again from a free-kick, but it was tipped over by Juan Musso in the Bianconeri goal.

Three goals in the last half of the game… La Dea took the lead with a Luis Muriel penalty, after Cristian Zapata tripped his cousin Duvan. In stoppage time, the Grifone got a spot kick of their own and captain Domenico Criscito converted, however, the away side would not be denied a victory. It was super star striker Zapata with a ferocious shot from 20 yards out in the fifth minute of added time.

A comeback win for the home team… The Biancocelesti took the lead through a Ciro Immobile penalty, but seemed to sit back a bit and were made to pay for that. Andrea Petagna tied the game up with a left footed strike when he was left all alone in the box from a corner, and the home team confirmed the win when in stoppage time Jasmin Kurtic placed a rebounded shot into the net as the Lazio goalkeeper was drifting to the other side of the goal. 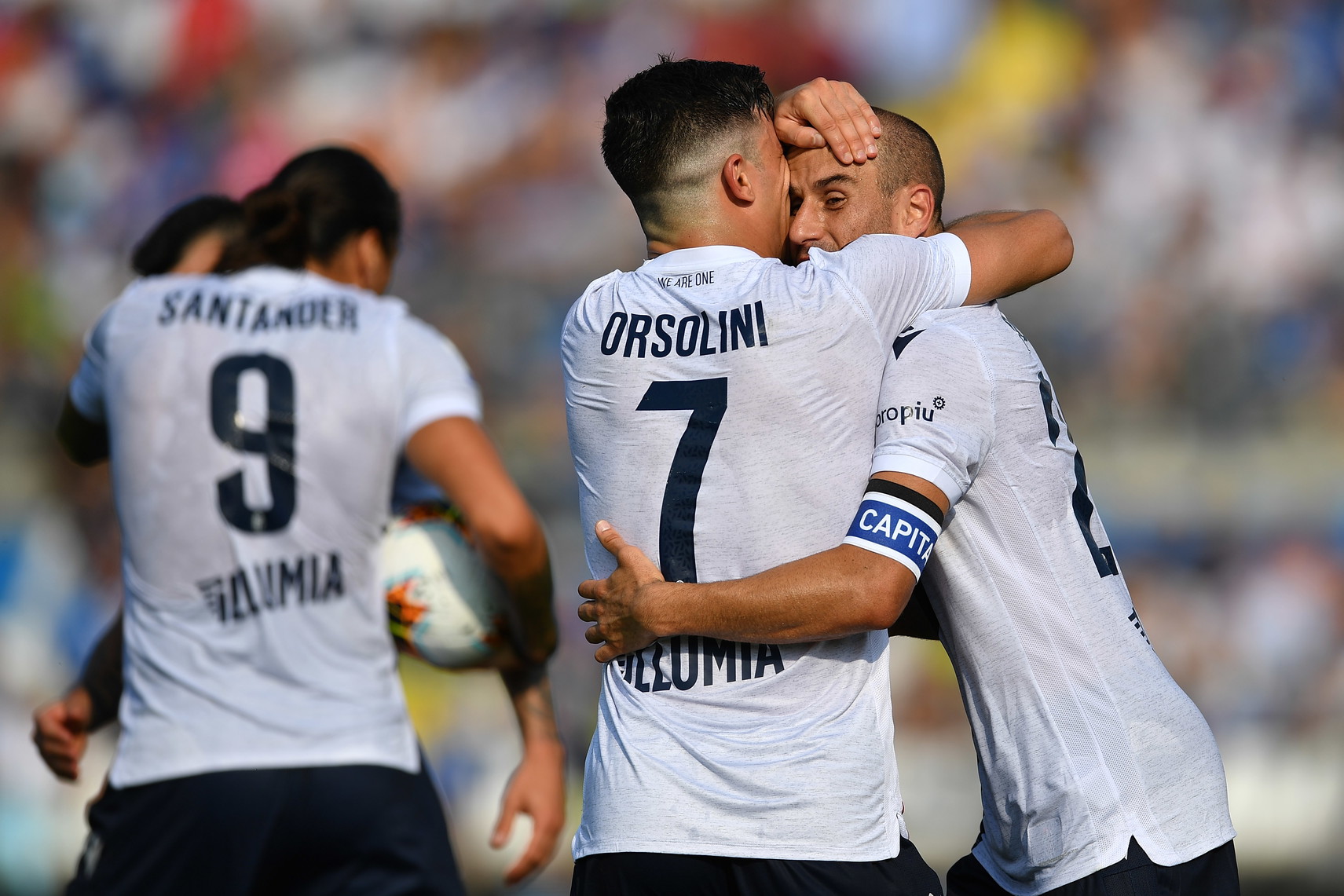 Despite scoring three times at home, La Leonessa failed to beat an inspired Rossoblu… The home team took the lead with a double from Alfredo Donnarumma, first from a header and then with a sumptuous right footed curling effort. There were two goals almost at the end of the first half, one for each team. The Emilia-Romagna side pulled one back with a Mattia Bani header, but then Andrea Cistana scored a bullet header from a corner to restore the home side’s two goal advantage. However, the away side launched an assault of the Lombardy goal and scored three times after the interval, to clinch the win. It was the Riccardo Orsolini show; he set up Rodrigo Palacio for a tap-in, then from a corner, Andrea Poli bundled home from close range and then the 21-year old got his name on the score-sheet with a volley from four yards out from a Palacio cross. 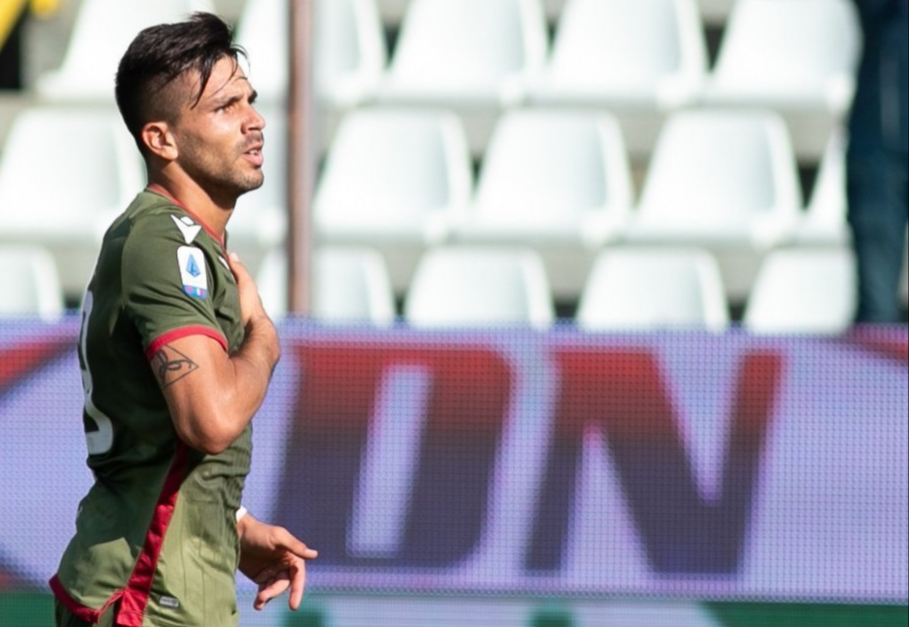 A brilliant performance from the Sardinians… Luca Ceppitelli gave the away side a two nil lead before half-time, with a first time finish inside the box along the ground and then doubled his tally with a header from a free-kick. The Crociati pulled one back in the 58th minute with a Antonino Barilla guided shot inside the box. However, the away team confirmed the points with a Giovanni Simeone solo goal from a quick counter-attack. 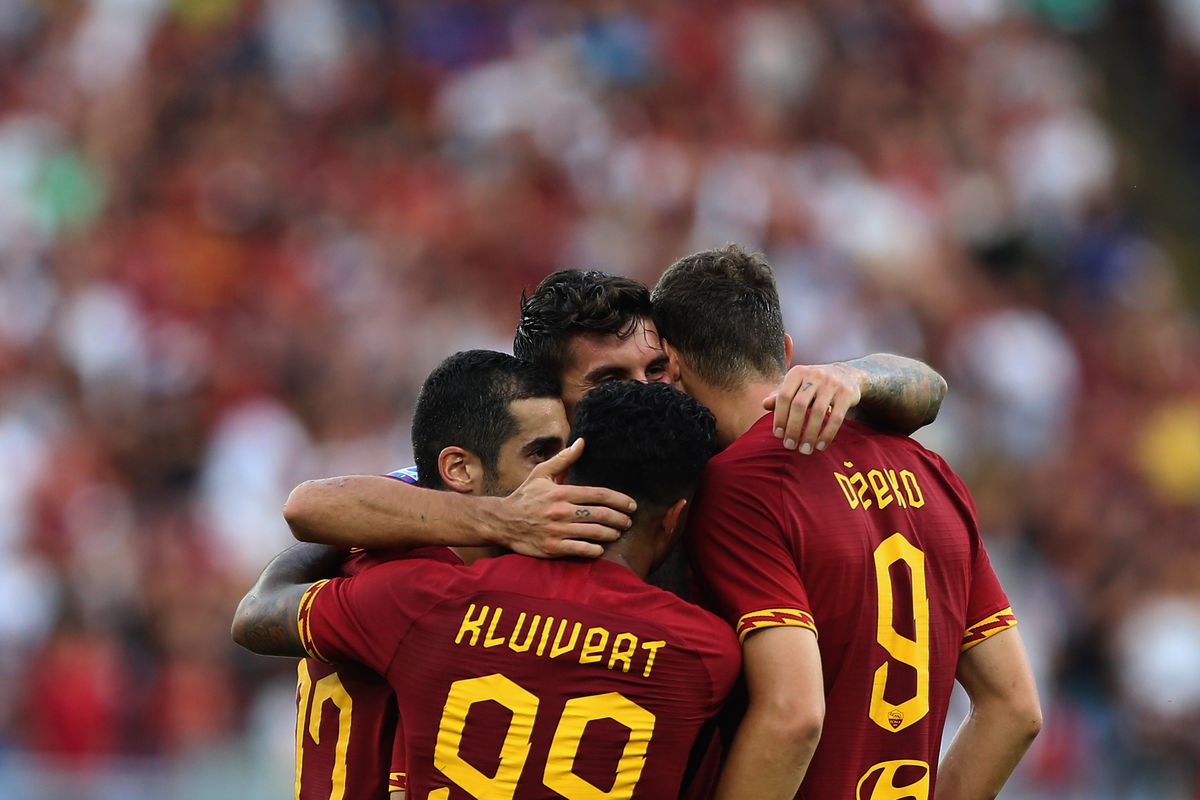 The Giallorossi scored four times inside the first 35 minutes of this clash… Firstly Bryan Cristante with a header in the 12th, Edin Dzeko with a volley from close range from a cross from the left, new boy Henrikh Mkhitaryan with a left footed shot and Justin Kluivert with a another break-away. Domenico Berardi got two in the second half for the Neroverdi, but it mere consolation. A tight game was decided by a Krzysztof Piatek spot kick… The home team were reduced to 10 men when Mariusz Stepenski was sent off for a high boot on Matteo Musacchio, but they were a bit better than the Rossoneri. Both teams hit the post early after the break. The key moment in the encounter came when a Verona defender handled a Hakan Calhanoglu shot in the penalty box and the Pole powered the spot kick home. The away side had Davide Calabria sent off late on, the resulting free-kick was hit into the wall by Miguel Veloso and the rebound shot went just wide.

The away side took a surprise lead when Diego Farias scored the rebound off his own shot being saved, after brilliant dribbling on the right. Andrea Belotti tied the game from the penalty spot early on in the second half, after Simone Zaza was fouled. 15 minutes later and the Southerners were back in front, this time for good, as Marco Mancosu fired home after a shot had been saved by Granata goalkeeper Salvatore Sirigu.