Matchday 14 of the 2019/20 Serie A saw a change at the top of the table, continued problems at Napoli and Brescia, and a match of the season candidate between Cagliari and Sampdoria…

A Derby win for La Dea… Atalanta dominated this bitter rivalry and took the lead at the 26th-minute mark as Timothy Castagne crossed was well headed home by Mario Pasalic. The Croatian doubled his tally with a back-flick from a Josip Ilicic low cross and the Slovenian got a goal of his own in a man of the match performance, scoring on a breakaway.

The Grifone must wonder how they lost this match… They dominated, hit the woodwork two times and played the better football overall, but it was the Granata that grabbed all three points. The lone goal came in the second half as a Simone Verdi cross found an un-marked Bremer and the Brazilian leapt to head home from close range.

I Salenti continued their fine away form… La Viola put the away side under severe pressure, but they held firm and got a goal from Andrea La Mantia. Soon into the second half, La Mantia collected the ball raced into the penalty area and after build-up from Diego Farias and Yevhen Shakhov, the 28-year old was there with a diving header to give the Southerners a shock lead. The Tuscan manager Vincenzo Montella must be under pressure as we speak.

An entertaining encounter at the Allianz Stadium… The Bianconeri took the lead as Leonardo Bonucci struck a low drive that cannoned into the far post, however, the lead did not last long; Jeremie Boga finished off a well-worked move with a sumptuous chip in the six-yard box. A couple of minutes after the interval, it was the Neroverdi that took the lead as a comedy of errors from the defending champions fell to Francesco Caputo, he had a low shot that went under Buffon and crawled past the line. 20 minutes later and it was all tied again, as Cristiano Ronaldo converted a spot-kick after Paulo Dybala was fouled in the box.

Three goals in the first half for the Biancocelesti gave the home side a deserved win to maintain their Champions League push. Ciro Immobile scored a brace, firstly he guided home a Sergey Milinkovic-Savic cross and his second was a penalty after Joaquin Correa was fouled. The Argentine again was fouled on the stroke of half-time and Luis Alberto took the spot-kick this time, with the same end result.

Lautaro Martinez continued his fine form to take the Nerazzurri to the top of Serie A…The home side won the ball in the middle of the park and the Argentinian raced away and slotted the ball to the far post to give his side the lead. At the end of the half, an Antonio Candreva cross was met by the 21-year old as he was all alone and the outcome was inevitable. Soon after the break though Mattia Valoti halved the lead with a lovely solo goal, ghosting past a couple of il Biscione defenders to score, however that would be as close as the Ferrara side came.

The Rossoneri dominated most of this clash away at the Crociati but had to wait until the very end of the match to claim the win. A shot from Giacomo Bonaventura was saved by Luigi Sepe, it rebounded off a couple of Parma defenders, fell kindly to Theo Hernandez and the French left-back scored with the outside of his left peg to give the away side all three points. The crisis continues for the Partenopei… The home team dominated the first half and took the lead late on as Fernando Llorente scored off a rebound after a Lorenzo Insigne shot was saved. The Rossoblu equalized with a lovely counter-attack that was finished off by Andreas Skov-Olsen. Less than 10 minutes in the match and the Emilia-Romagna side took the lead; the pressed the Napoli defense, Blerim Dzemaili fed through Nicola Sansone and he did the rest to give his side the victory. 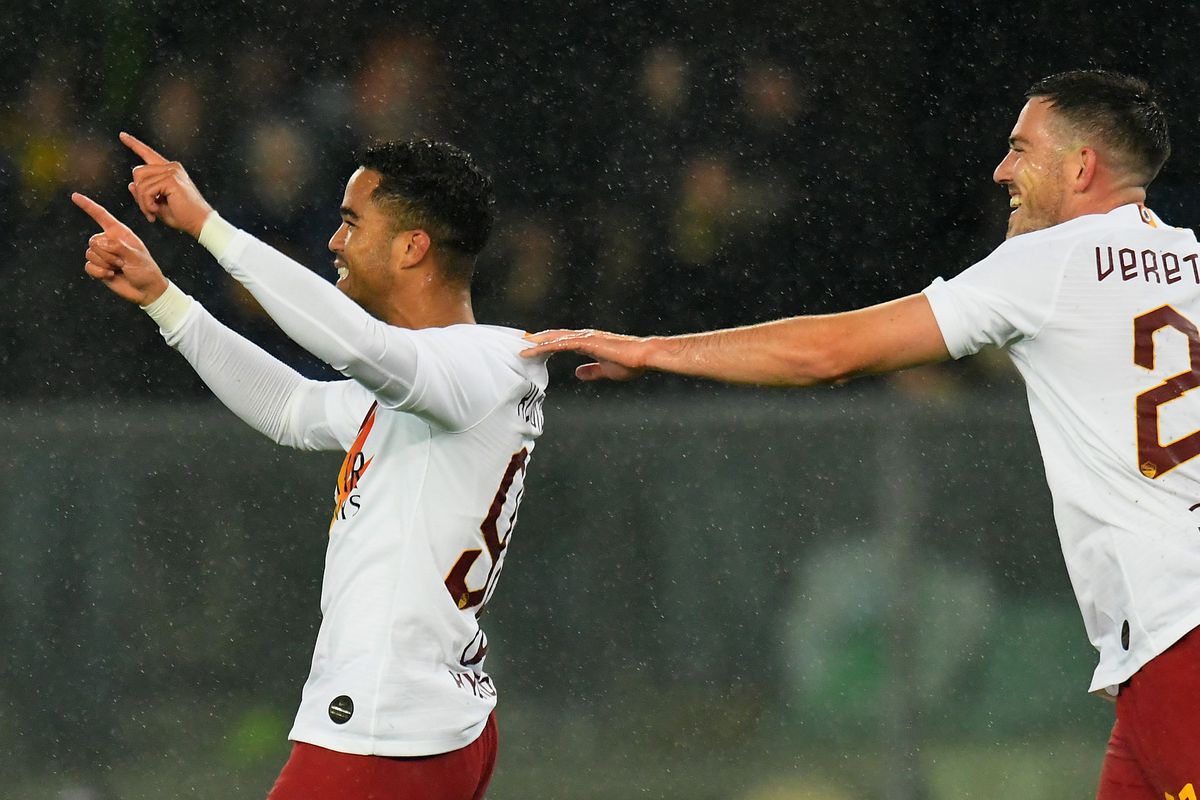 The Giallorossi took an early lead as Lorenzo Pellegrini fed through Justin Kluivert and the Dutchman scored from a tight angle in the 17th minute. Soon after it was all square as Marco Faraoni scored with a header while being left all alone. On the stroke of the half Diego Perotti scored from the spot after Edin Dzeko was hauled back in the box. The home side played a good game and had some close chances but it was il Lupi who scored another late on as Mkhitaryan finished off a Perotti cross to confirm the points.

Comeback from the Casteddu! Fabio Quagliarella scored the first goal from the penalty spot that gave the away side the lead. The Bluecherciati doubled their advantage soon after the break as Gaston Ramirez scored on a long ball. Player of the month for November, Radja Nainggolan pulled one back for the Sardinians with a low drive. Quags restored the two-goal advantage with a volley. However, the home side banged in three goals in the last 15 minutes to secure a memorable win. Joao Pedro with a brace courtesy of a back-heel and a sliding finish from a Nainggolan cross. Incredibly in the sixth minute of stoppage time, the Isolani scored a winning goal as Alberto Cerri rose high to power a header into the goal. WHAT A MATCH!

There is mid-week action in the Coppa Italia including a re-match between Cagliari and Sampdoria.