When we got him, my god, it seemed like Jesus Christ was arriving… 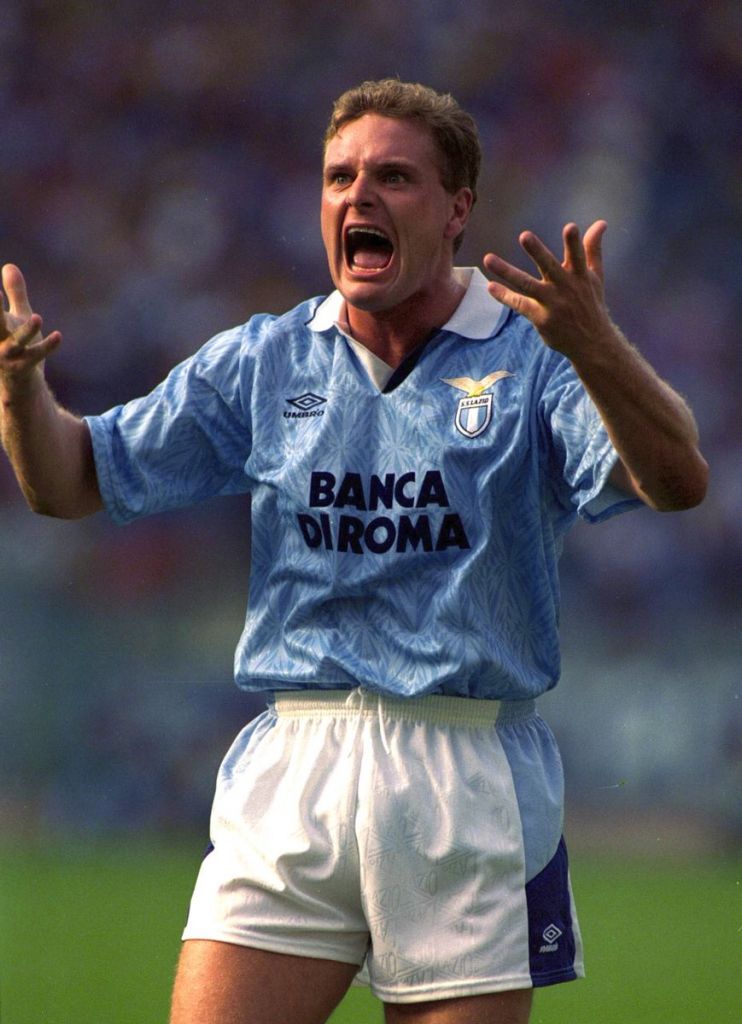 Paul Gascoigne was met with nearly one thousand Lazio fans the moment his feet stepped off the plane at Fiumicino Airport in 1992.

Reminiscence of Diego Maradona’s God-like entrance in Naples must have been replaying in the minds of all those who were lucky enough, and crazy enough, to wait at the airport just for a glimpse of the record-breaking signing who had flown over from L’Inghilterra.

The £8.5 million figure (which was later reduced to £5.5 million after his long-term injuries) was a signal of intentions from the new owner, Sergio Cragnotti. He required a stand-out signing that was to flagship the new era under the food tycoon; Gascoigne was most certainly ‘it’.

But the injuries to his leg were crushing. He had so many knocks to his leg in England that it was a miracle he could even run. Even from the get-go, Gazza did not seem on the level that the fans of his previous clubs had been lucky enough to witness.

Mediocre performances started in the 1992/1993 season and a sense of an underwhelming signing began to fill the air of the Stadio Olimpico. However, it was not until the day of the Derby della Capitale, the day that every Roman reveres, when Gazza changed the path of his Italian adventures forever.

Guai a chi ce lo tocca; Trouble to anyone who touches him. 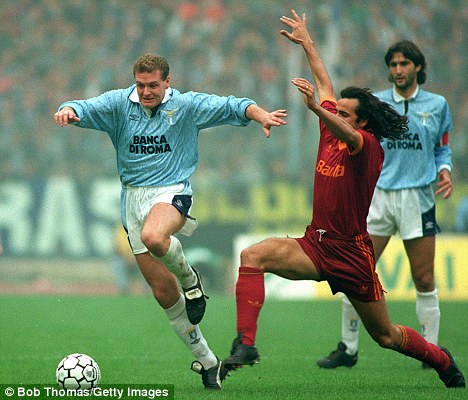 It was clear Lazio’s Curva Nord had favoured Gascoigne and now perceived him as their ‘saviour’. The 1992 Rome derby was always going to be a hotly contested one and with the media build-up being even more intense than in previous years; it was almost fate that the Englishman would play a vital part.

The score was 1-0 and with four minutes to go, the game looked set to finish in an uninspiring loss. However, Gazza had other ideas. The boy in blue-headed the equalizing goal past Giuseppe Zinetti and into the goal, causing a sea of 35,000 people to erupt in a breath-taking explosion of emotion and cheer, with flares being set off around the Curva Nord; the other 35,000 dressed in red were not so happy.

I’ve played in some big derbies before, up in Glasgow as well, but that was not normal. Scoring was just an unbelievable feeling, but it was not a good feeling, it was more a feeling of ‘thank god for that’. 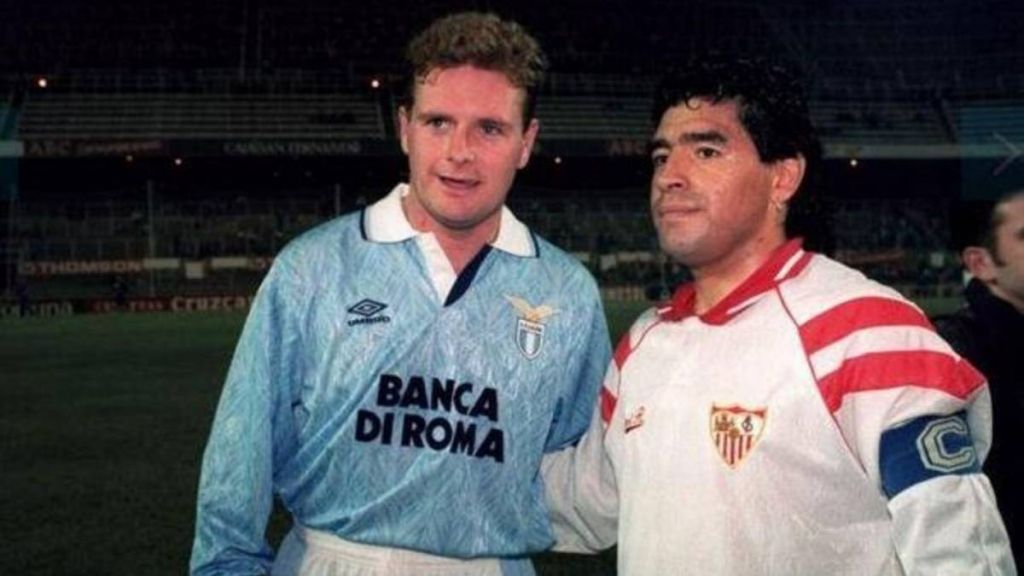 Of course, after a goal like that, the man could do no wrong. The press was calling him the ‘best attacker to grace Italian football since Maradona’. However, as much as the Italian press loved the highs, they also loved the lows and with his off-pitch antics becoming more popular than the ones on, his time in Rome was never going to be a long one.

He deflated the tyres of Aaron Winter’s Porsche, he slipped a dead snake in Roberto Di Matteo’s jacket pocket, he attached Dino Zoff’s whistle to a Turkey and released the bird on the training field, and had a propensity to turn up to team dinners naked. 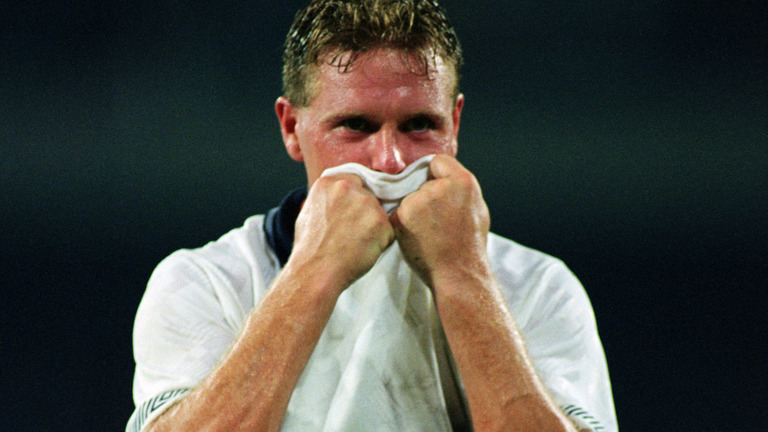 The following seasons had been similar to that of his first few games at Lazio; uninspiring. When he came back for the 1993/94 season overweight, relationships began to grow thin and the hounding of the Italian media heightened.

With a series of injuries, poor performances and off the pitch issues, Gascoigne’s honeymoon in Rome seemed like it was drawing to a close. The arrival of new manager, Zdeněk Zeman, also did not help. In the 1994/95 season, Gazza only played 5 games; this was enough to send the Brit back to familiar waters with a transfer Scottish side Rangers sealing his fate.

To this day, banners of Gazza can be seen flying around the Curva Nord at most games and, on the rare occasions he returns to the Stadio Olympico, he is greeted just like he was when he first set foot in the Capital; like a God. 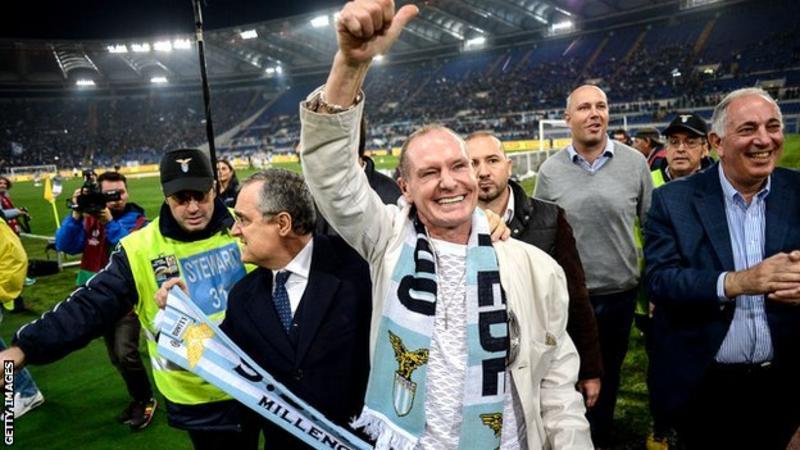