There is some controversy in Rome today concerning AS Roma and Lazio.

Over the weekend, Biancocelesti striker Ciro Immobile celebrated his 31st birthday. Plenty of people close to the Lazio forward sent their congratulations, well wishes or spent time with him on his birthday.

One of these people was Roma captain Lorenzo Pellegrini, who said:

Both players have played on the same Italy National Team squad, so there’s a connection despite their club’s being rivals.

Nonetheless, an innocent post at a dinner sitting with his friend, who happens to play for Lazio, didn’t sit well with the Roma Ultras.

Corriere dello Sport reports of a banner that the Ultras took that began circulating social media, which read:

Pellegrini is not my captain. 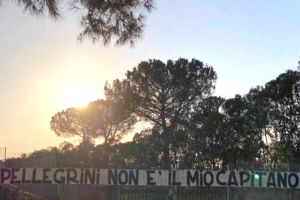