This was a match where the Biancocelesti dominated possession and created more chances but were poor at finishing. On the other side, Inter were more clinical in scoring their chances.

So, what went wrong with Simone Inzaghi’s side tactically?

Lazio started the game with their basic 3-5-2 but with a fatal change with Stefan Radu being out from the line-up minutes before the match. Wesley Hoedt was inserted in the middle of back three instead of him. 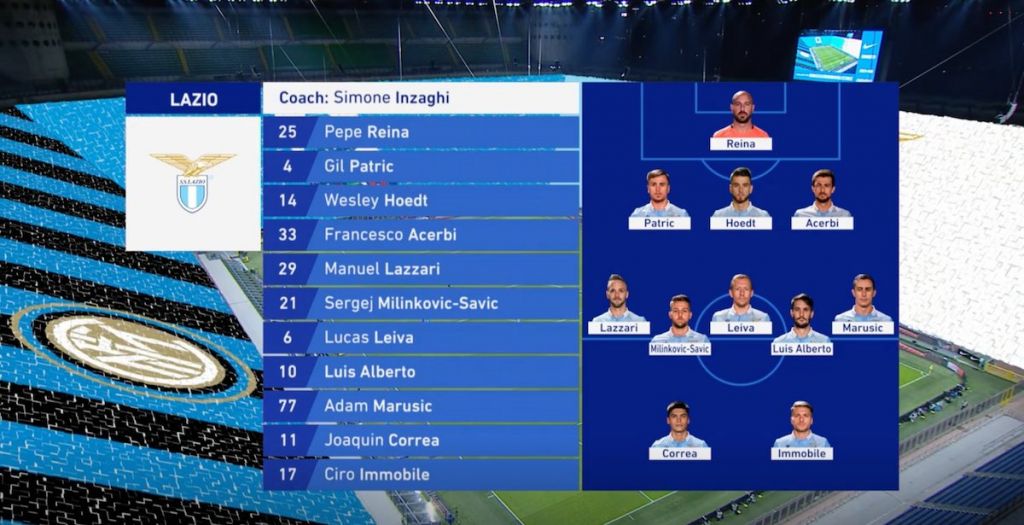 They pressed high, with the help of their attacking duo, Ciro Immobile and Joaquin Correa. The main objective was to close any potential passing lane to Marcelo Brozovic; the player responsible for helping the Inter backline beat the press. 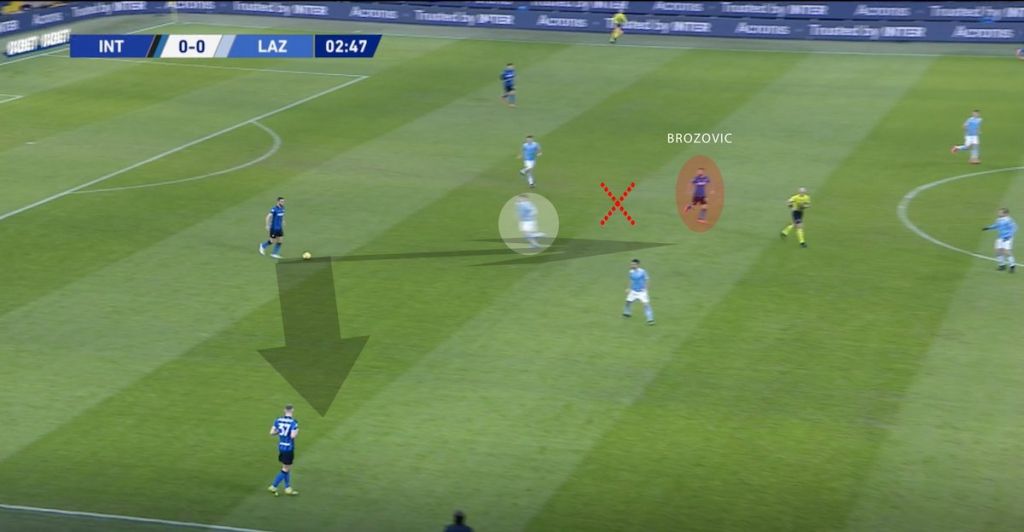 However, it was also to force the Inter backline to play long balls or play to their wide players. Forcing the Nerazzuri wide was one of Lazio’s pressing triggers; if the ball was successfully passed to Achraf Hakimi, Nicolo Barella or Brozovic, there would be an ‘overload’ to try and intercept the ball. Anyone who received the ball wide was pressed aggressively. 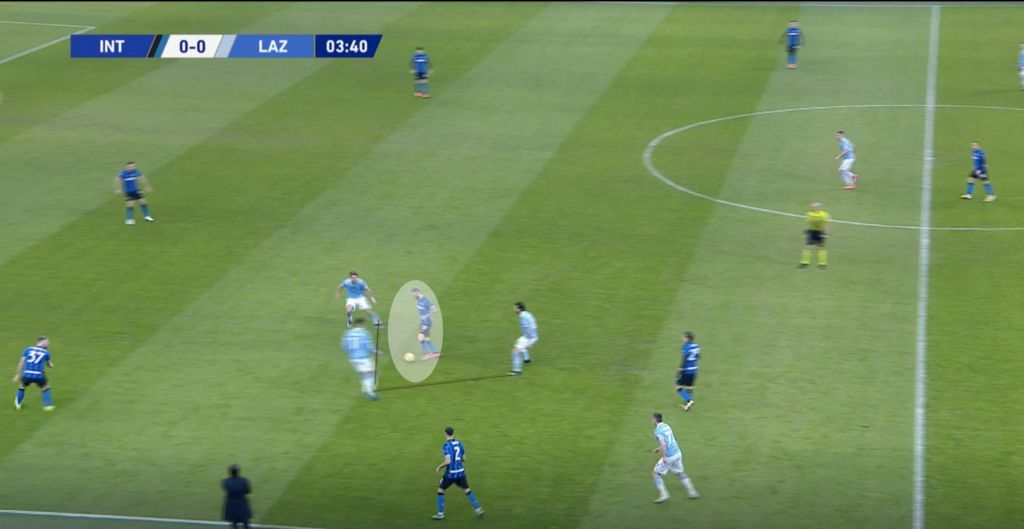 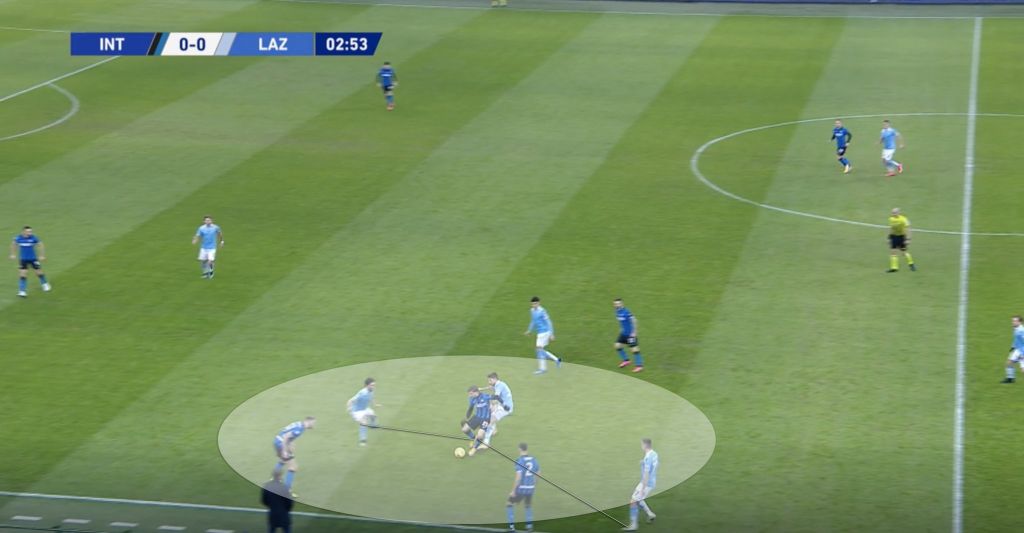 In the first half, Lazio primarily attacked from the left side. We can see this from the photo below, as Sergej Milinkovic-Savic was asking for the ball but Lucas Leiva insisted to play to the left side (to Correa). 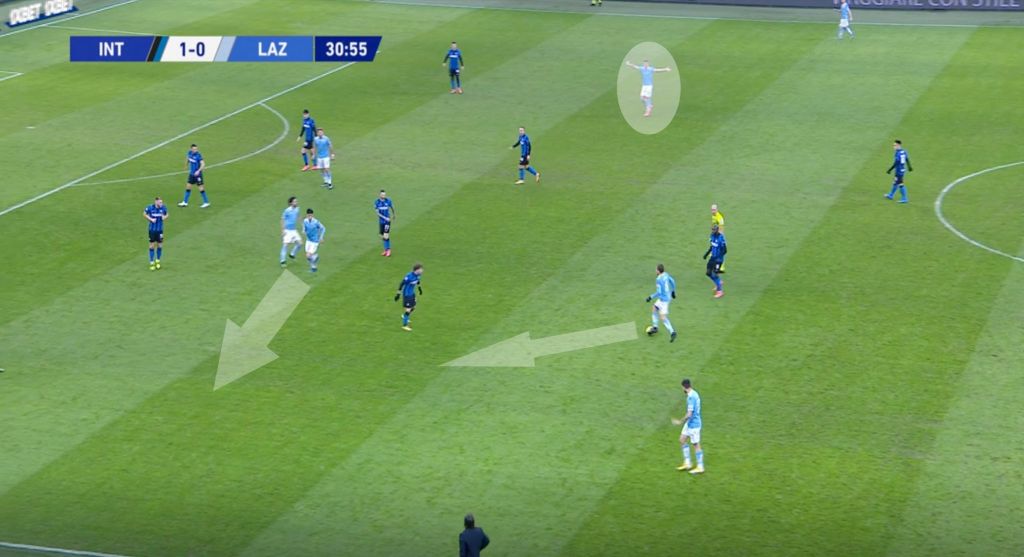 The main theme in Lazio’s attacking system was Francesco Acerbi completing overlaps down the left flank. The Italian was doing this throughout the entire match, with Luis Alberto or Lucas Leiva covering him. This tactical move from Inzaghi stopped Hakimi from going forward; the left flank was always overloaded with either Adam Marusic, the overlapping Acerbi and sometimes even Luis Alberto or Correa. 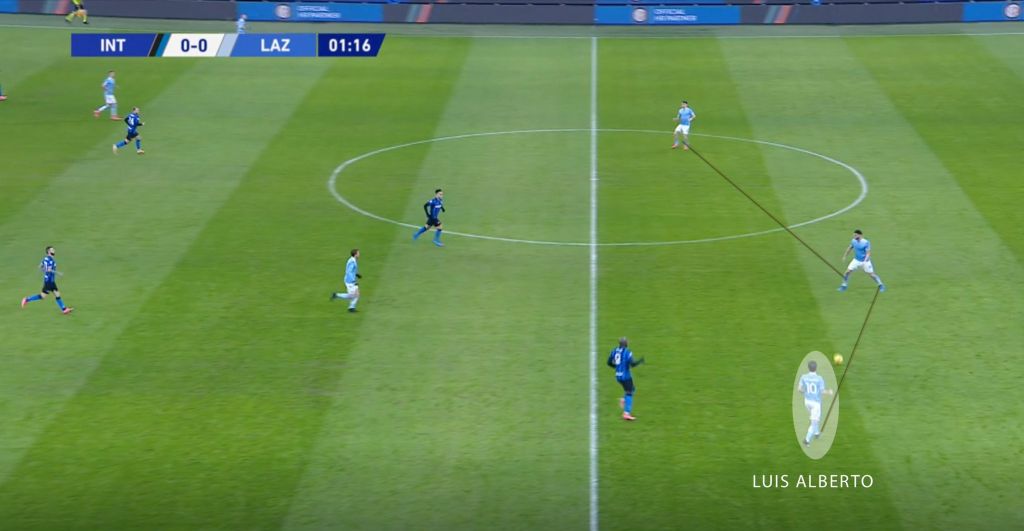 It confused Hakimi about whether to go wide to cover the overlap or to cover the space between him and Milan Skriniar. 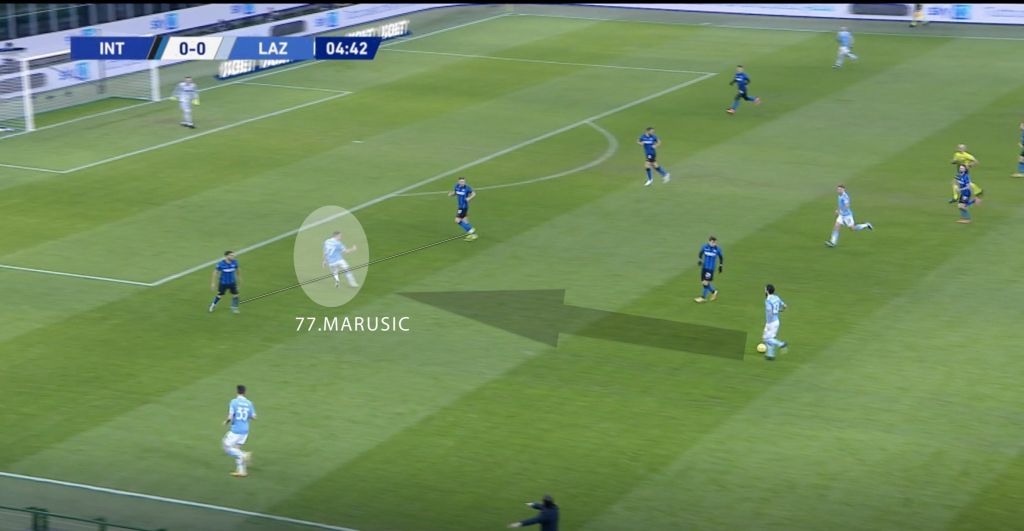 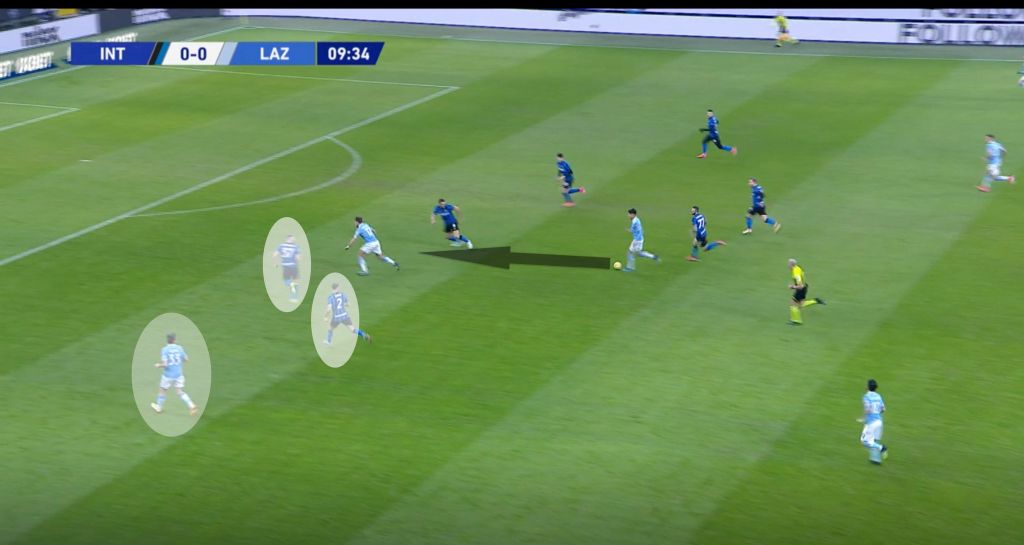 On the attack, Inter were playing with a high-line and this was exploited well by Manuel Lazzari in the 12th minute, following a perfect long ball from Lucas Leiva. 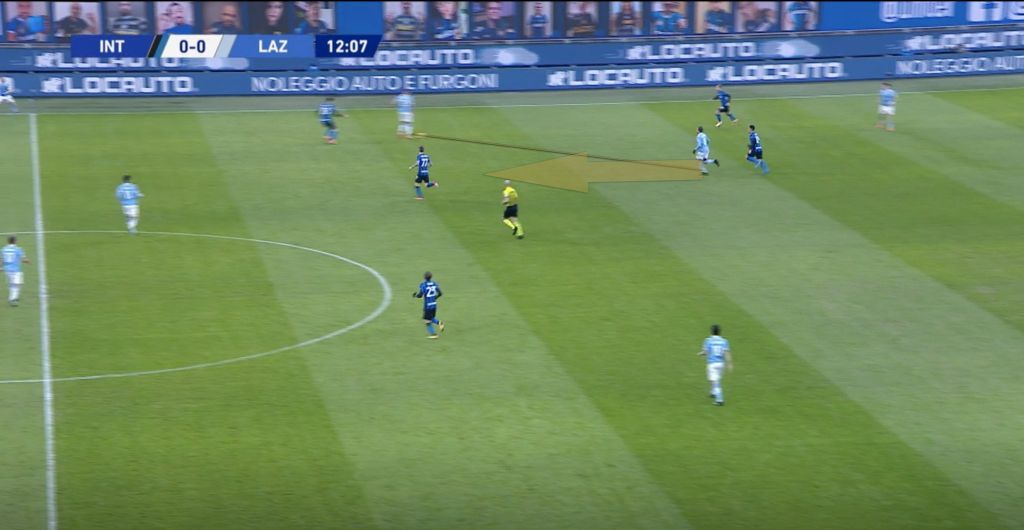 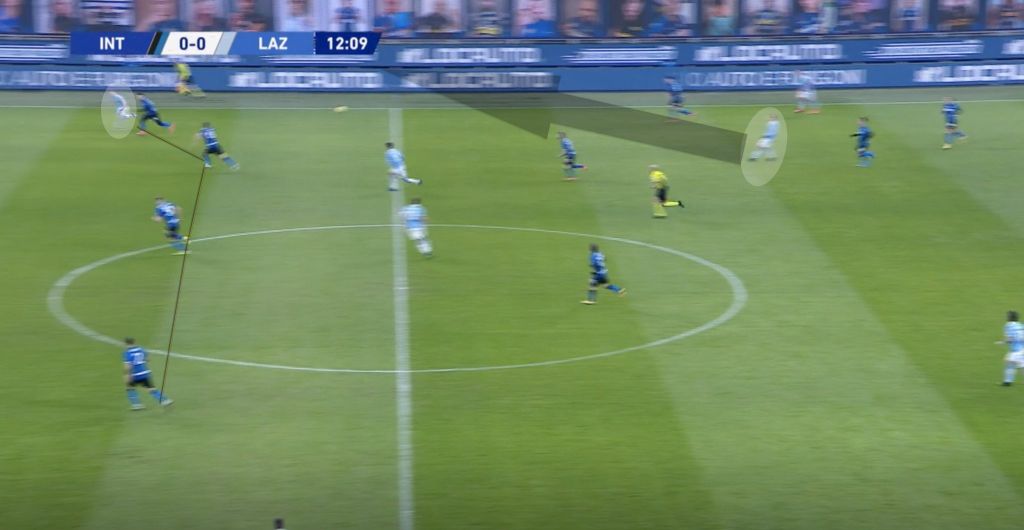 Lazio’s main problem was with the space behind Patric and the space between Hoedt and Patric. Inter exploited it more than once. However, on the right flank, Lazio stopped Perisic from going forward with the same tactics they used with Hakimi. They ‘overloaded’ the flank with Lazzari, Sergej Milinkovic-Savic and Patric which prevented Ivan Perisic from going forward for most of the first half. Patric sometimes also made the overlap too with Lazzari cutting inside. But when Perisic went forward, he was really dangerous. Before Inter’s penalty, he exploited the space behind Patric. 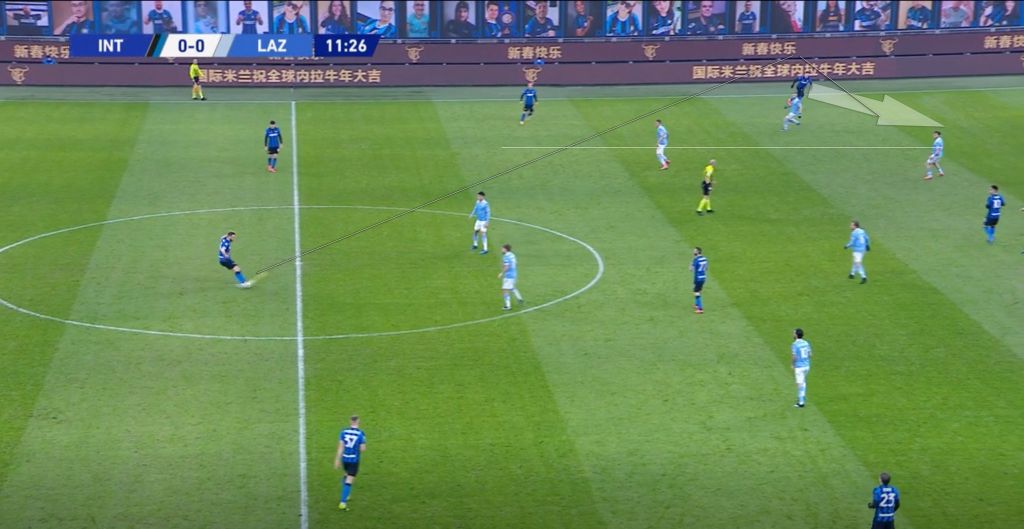 Inter Milan also pressed high, with Christian Eriksen, Lautaro Martinez and Romelu Lukaku as the front three closing all the passing lanes and forcing Lazio to play long balls, with Brozovic and Barella shadowing them. 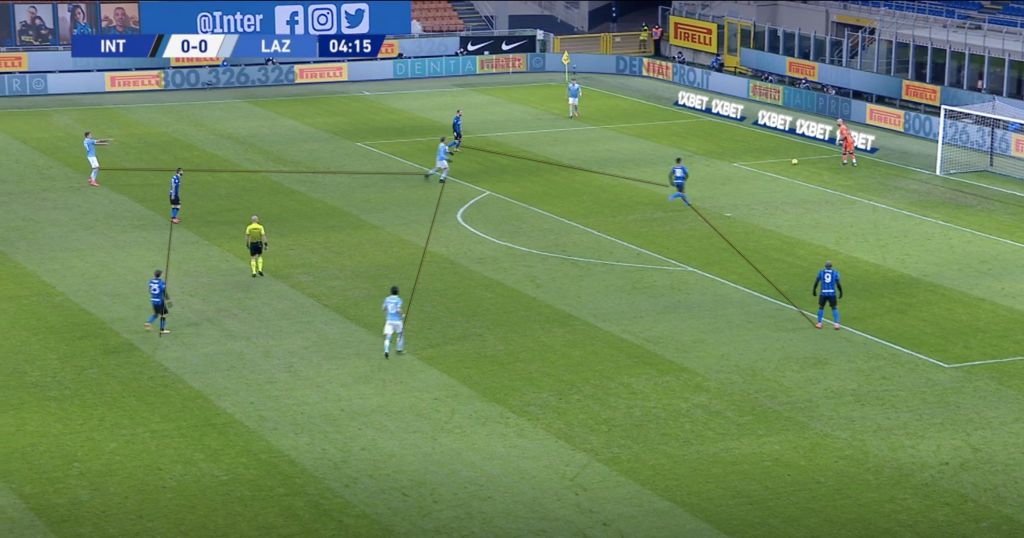 At the time before Inter’s penalty, Lazio were controlling possession. However, Inter took the advantage of bad positioning and the rush of Lazio defenders Patric and Hoedt. The space between Patric and Hoedt was Lazio’s main weakness that Inter knew how to exploit. Brozovic exploited the space with a pass behind Patric to the running Martinez who took advantage of the bad positioning of Hoedt. Hoedt was out of his position to intercept the ball from Eriksen and this left vast areas behind him. Although he tried to recover, it was late. 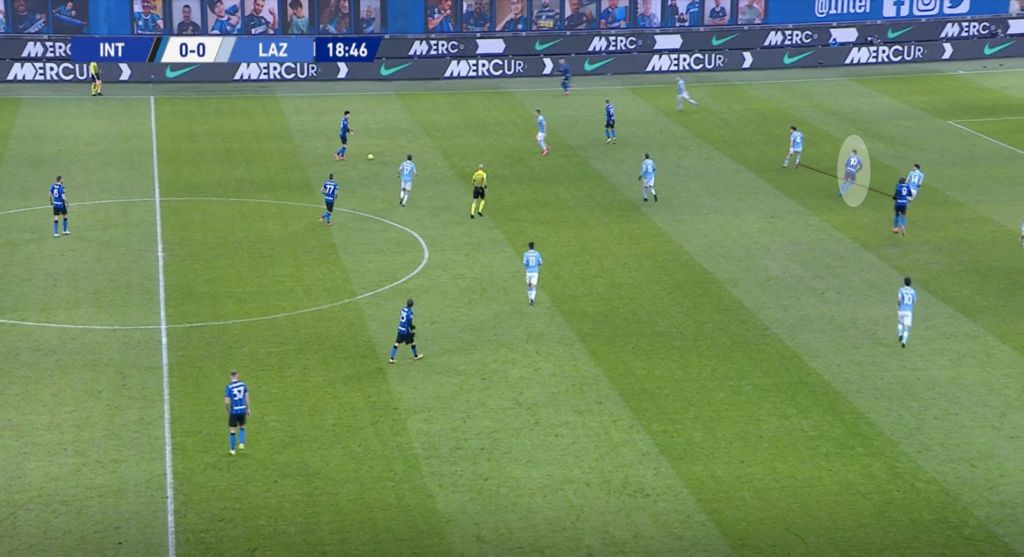 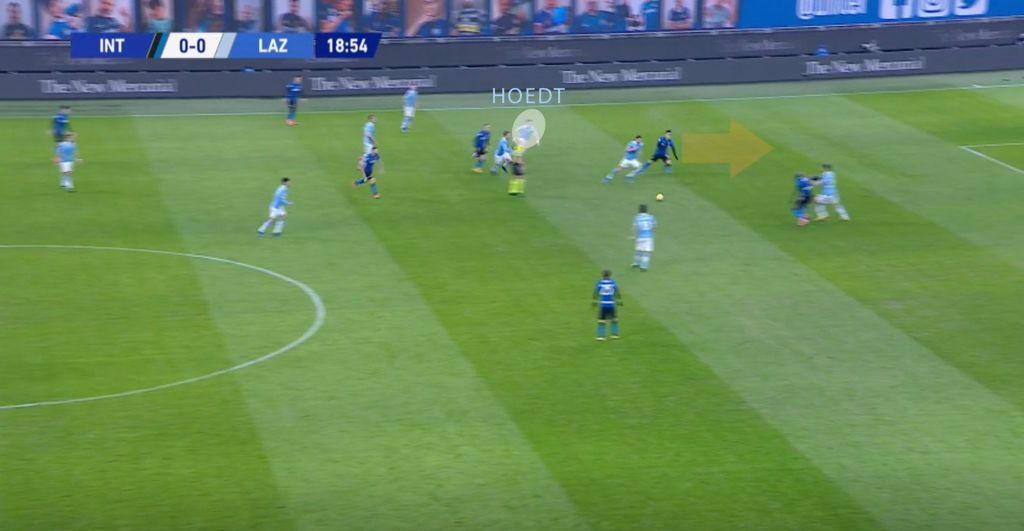 Eriksen had a great game as he played in different positions with different roles. On the defensive phase, he helped Perisic due to the ‘overload’ previously mentioned. He was the player linking Inter’s counter-attacks as he was decisive in the half-spaces. He not only knew how to receive the ball in the most dangerous of zones for any player, but he also knew how to escape from Milinkovic-Savic, who had to choose to cover either him or Brozovic. One of the most dangerous chances for Inter in the first half was created by him. 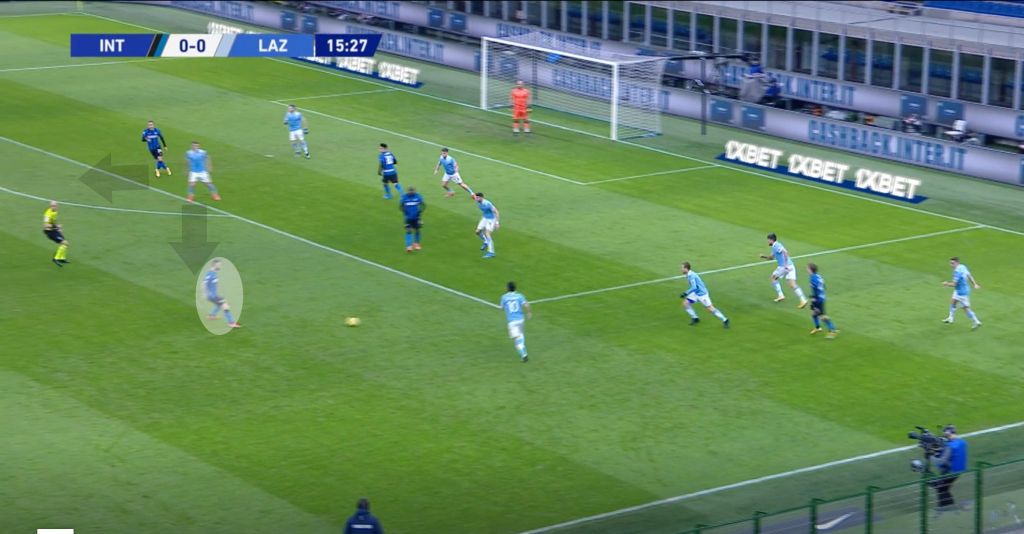 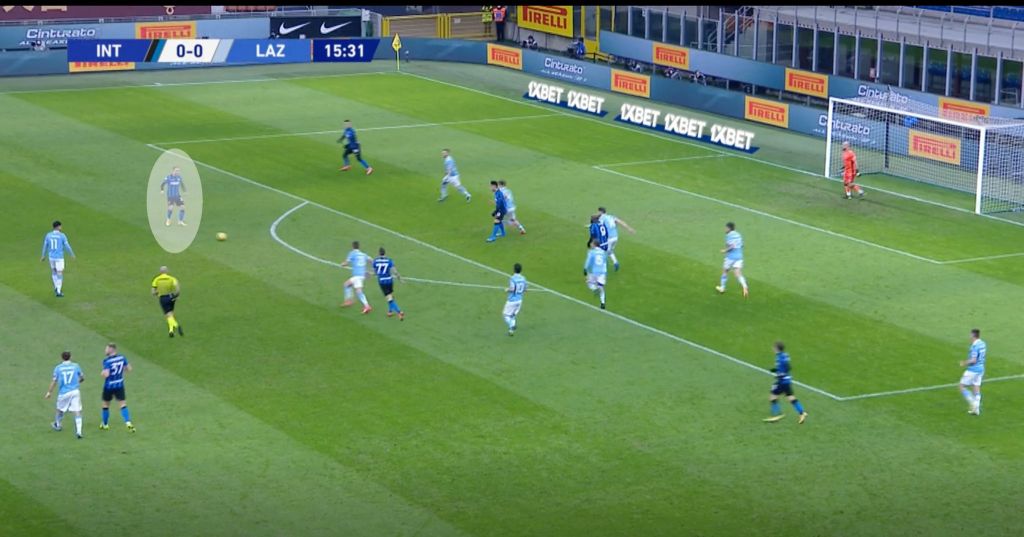 Eriksen also exploited the space behind Patric. One of the reasons behind the disorganization in Lazio’s backline was the fact that Acerbi was excessively overlapping, but the main reason was the absence of Radu. 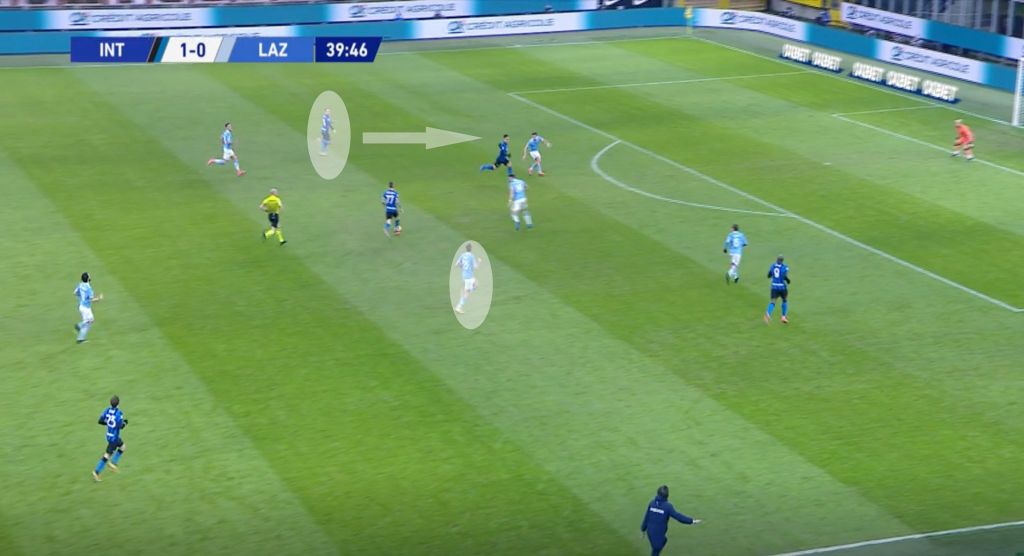 Inter’s second goal came from the same space between Patric and Hoedt; although it was a bit lucky for Inter and Lukaku! 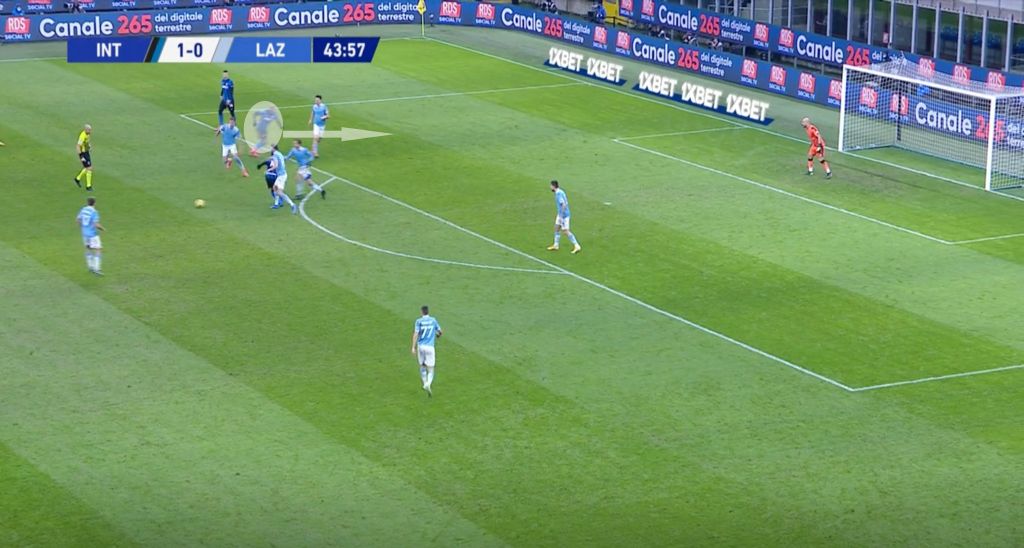 Inzaghi made two changes with Hoedt and Lucas Leiva coming out for Gonzalo Escalante and Marco Parolo. Their main job was to cover Acerbi’s runs; the strange decision was playing Parolo as a centre back which isn’t his natural position. Lazio went all-out attack and Inter stopped pressing high and relied mainly on the counters. Even Parolo and Patric were overlapping. Acerbi stayed forward for most of the second half, even going into the box to try and get on the end of crosses. 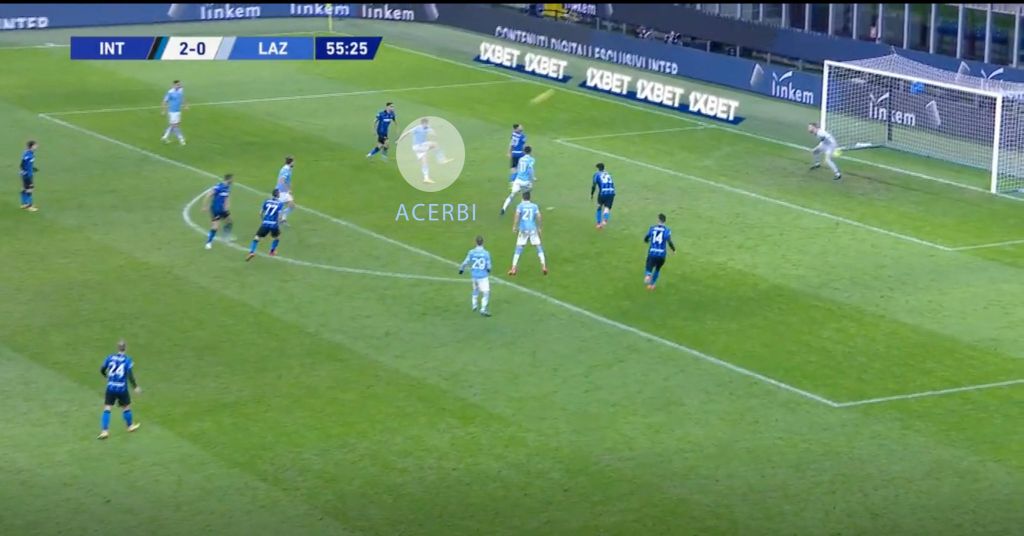 This decision made Lazio very vulnerable on the counter-attacks; Inter played a low block for most of the second half, waiting for the perfect moment to strike. 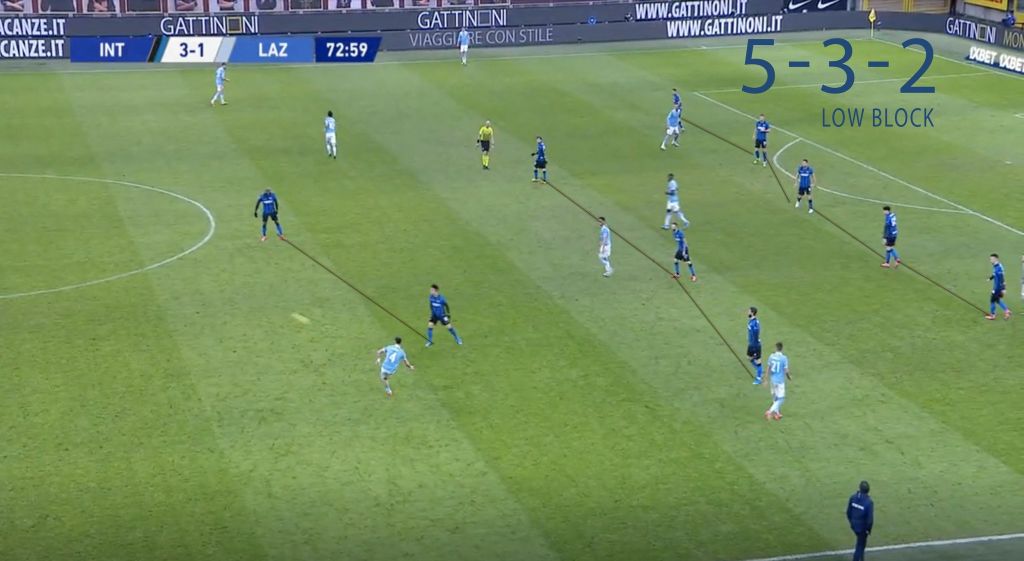 Although Lazio came back into the game with a well-deserved goal, it didn’t last long as Inter scored their third goal just minutes after. This goal showed how Parolo was misused as a center-back; Lukaku had the pace to run past the Italian and find an open Martinez. 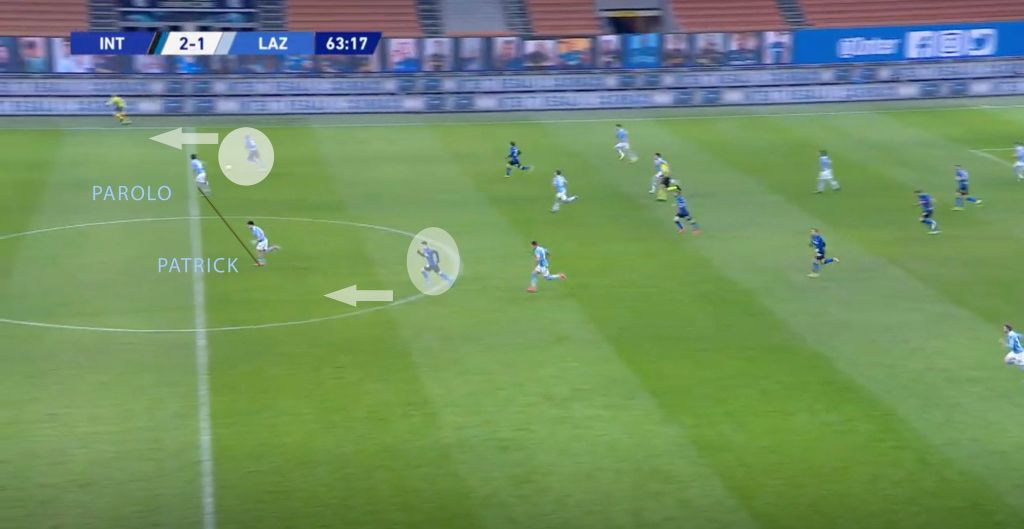 Immobile and Correa had problems receiving the ball in the half-space or in the box and Inzaghi wanted to add fresh legs. As a result, Vedat Muriqi and Felipe Caicedo were called upon with a forward approach to get more men on the box and try to take advantage of the crosses. However, Lazio didn’t do this, with Muriqi and Caicedo struggling to make any threat on Inter’s goal.

The main takeaways from this match:

With the European champions in Bayern Munich on Lazio’s plate, there are some lessons that Inzaghi can learn from the match against Inter.