Italy and Spain ended in a 4-2 win for the Azzurri in the Euro 2020 Semi-Finals after a penalty shootout at Wembley Stadium.

The match was tied after 90 minutes as Federico Chiesa scored in the 60th minute for Italy while Alvaro Morata tied it in the 80th minute for Spain. Neither side managed to score in extra time which led to the fixture being decided by spot-kicks.

Morata missed from the spot and the Azzurri needed Jorginho to convert to seal the victory. The midfielder scored with his signature move and was immediately surrounded by his teammates.

It was a moment of joy and celebration, as they will play in their fourth Euro finals, aiming to secure their second Euro trophy; something they have not done since 1968.

It was the most difficult test for Italy during these Euros as they were dominated for the course of the match. Spain’s midfield rose to the challenge and outperformed the Azzurri’s midfield, who gave them little space and time to make decisions with the ball. Italy’s chances were limited as they were on the defensive end for the course of the match.

This group is amazing. Everyone wants to win, but this group of players wanted to do something special.

On the match itself, Mancini stated:

Penalties are cruel. It was a tough team, Spain are a great side who play really well.

We didn’t play the way we usually do, but fought hard and knew it’d be like this.

As has been the case for most of the tournament, Italy have shown to be a resilient team that are hard to break down. The backend did a great job limiting Spain from gaining space inside the goal area and made key blocks when needed. 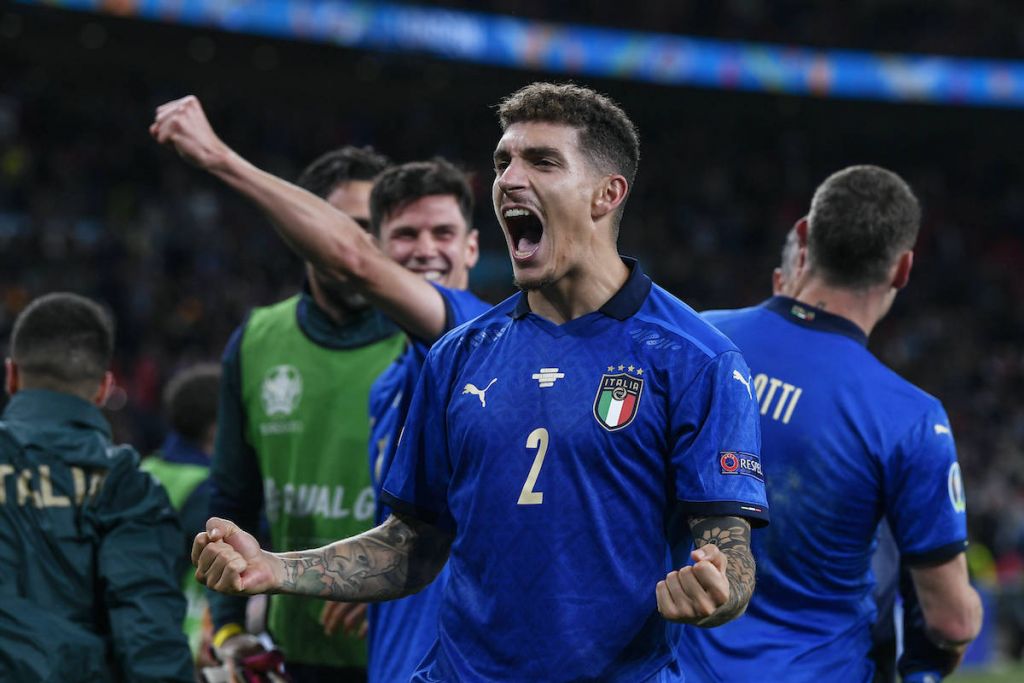 While there have been many notable players for Italy in this tournament, such as Leonardo Spinazzola, Jorginho, Manuel Locatelli, Giorgio Chiellini, Leonardo Bonucci and Gianluigi Donnarumma, one player in particular who has flourished and risen to the occasion has been Giovanni Di Lorenzo. The right-back has filled in admirably for the injured Alessandro Florenzi, who hasn’t played since their group stage opener versus Turkey.

It’s safe to say that Di Lorenzo was one of the surprise picks to be on this Italian side and has proven Mancini right. His most difficult task during these Euros was against the speedy Belgium forward, Jeremy Doku, who proved to be a challenge. He was quick with his runs and had a step on Di Lorenzo, yet the defender managed to keep him off the scoresheet.

Di Lorenzo followed up with an impressive performance versus Spain. He showed good composure, defended very well, limited his opponent’s chances and was quite effective on the offensive end at times as well.

Against Spain, he was defending Ferran Torres and limited the forward from recording a shot on target. In addition, Torres only had 39 touches, didn’t create any chances and completed the fewest passes with 31 amongst the starting eleven. Torres was one of Spain’s most effective players during these Euros and Di Lorenzo kept him in check.

Throughout the match, Di Lorenzo was physical, assertive and made timely challenges to prevent players from receiving the pass. He finished the match with two tackles, two interceptions, two clearances and one blocked shot. The defender has come a long way this season with Napoli and his game continues to progress as he has shown the ability to make an impact when needed.

Italy is currently unbeaten in their past 33 national matches and they have been one of the most in-form teams during these Euros.

It has been quite the turnaround for them as they failed to qualify for the 2018 World Cup and now find themselves in the finals of Euro 2020.

They will now take on England at Wembley Stadium in the Finals of Euro 2020.