As reported by Italian newspaper La Gazzetta dello Sport earlier today, the 27-year-old Albanian full-back found himself at the centre of controversy after deciding to sign famous partisan song Bella Ciao for his initiation song after the club’s 10-0 friendly win over Radio Club earlier this week.

The song was made famous worldwide by Spanish TV series La Casa del Papel, which many claim is why the former Napoli and Empoli man decided to sing that particular song.

Lazio commented on the situation yesterday in an official statement, saying:

It is the duty of the club to protect one of its members and to avoid personal and political exploitation that certainly in this case has nothing to do with the informal and friendly context in which the episode took place.

The team’s training camp must continue with the utmost sporting commitment and in the atmosphere of serenity that has prevailed until now.

Last night, a banner appeared on the bridge on Corsa di Francia in Rome that was signed by the Lazio ultras, that said:

This has generated a significant reaction on social media, with many Lazio fans and others showing support for Hysaj with the hashtag #IoStoConHysaj (I am with Hysaj).

Below is a photo of the banner: 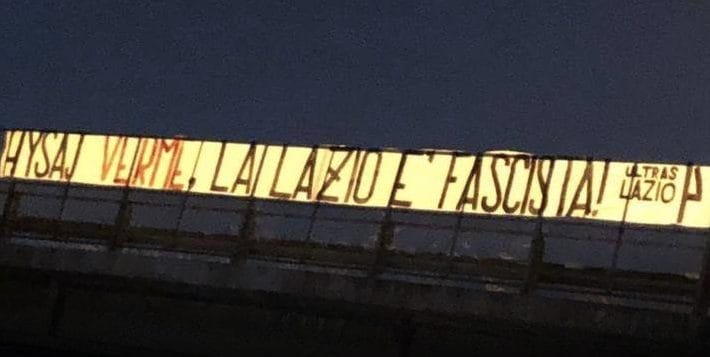