The Rome derby came up as early as Matchday 6 this Serie A campaign with Lazio being the home team.

After a year without fans in stadiums due to COVID-19, the partial opening meant that the encounter was set to be a feisty one between these two sides. However, the mystique of the matchup was the two tacticians on each side of the city; Maurizio Sarri and Jose Mourinho.

Sarri lined Lazio up in his usual 4-3-3, retaining the same shape to carry out his principles of Sarriball, while Mourinho’s Roma were without their captain Lorenzo Pellegrini, which saw Stephan El Shaarawy play on the left and Henrikh Mkhitaryan play as the #10 in a 4-2-3-1.

In the end, the Italian manager came out on top to win his first-ever Derby della Capitale 3-2; below is a tactical analysis of the fixture provided by Rohit Rajeev.

Lazio Without the Ball

Without the ball, Lazio settled into their usual asymmetric 4-5-1 shape, which even can be interpreted as a 4-1-4-1 (with Lucas Leiva acting as a holding midfielder and four midfielders in front of him) or a 4-4-1-1 (with one midfielder coming out of the shape to press the player on the ball). 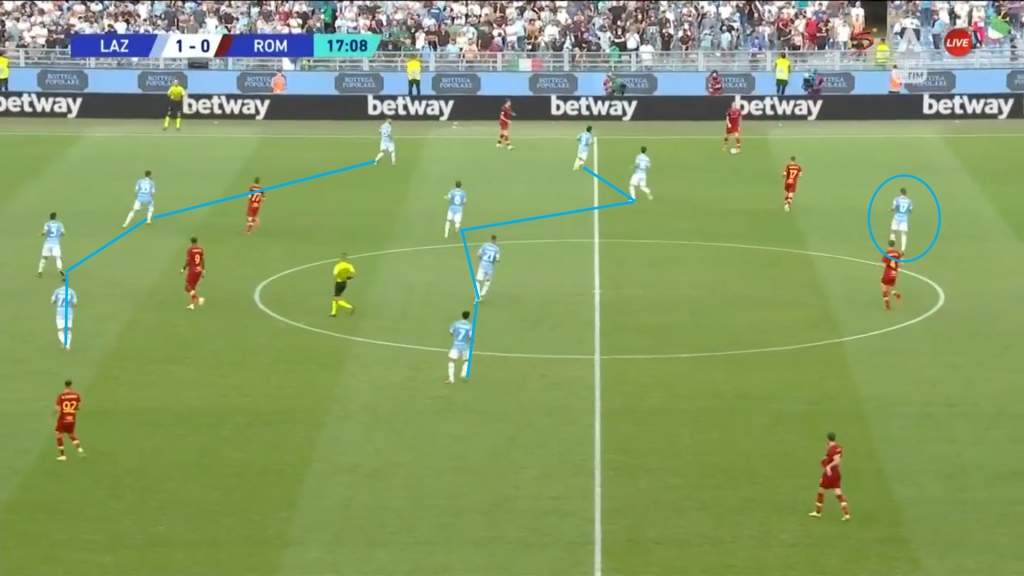 Due to Roma‘s shape in their 4-2-3-1 (which had the double pivot intact to prevent a Lazio counter-attack but allow them to build play from the back), Sarri deployed a “man-oriented pressing scheme” where Sergej Milinkovic Savic would press Bryan Cristante and Luis Alberto would press Jordan Veretout. This left Ciro Immobile free to press one of the center-backs, not allowing them to settle with the ball and forcing them to make a quick pass.

Sarri’s pressing tactics are not as vicious as Jurgen Klopp’s gegenpress but he has integrated a high press system at Lazio so far, where the players act as shadows, looking to cover passing options of the player in possession, ultimately forcing a risky pass. 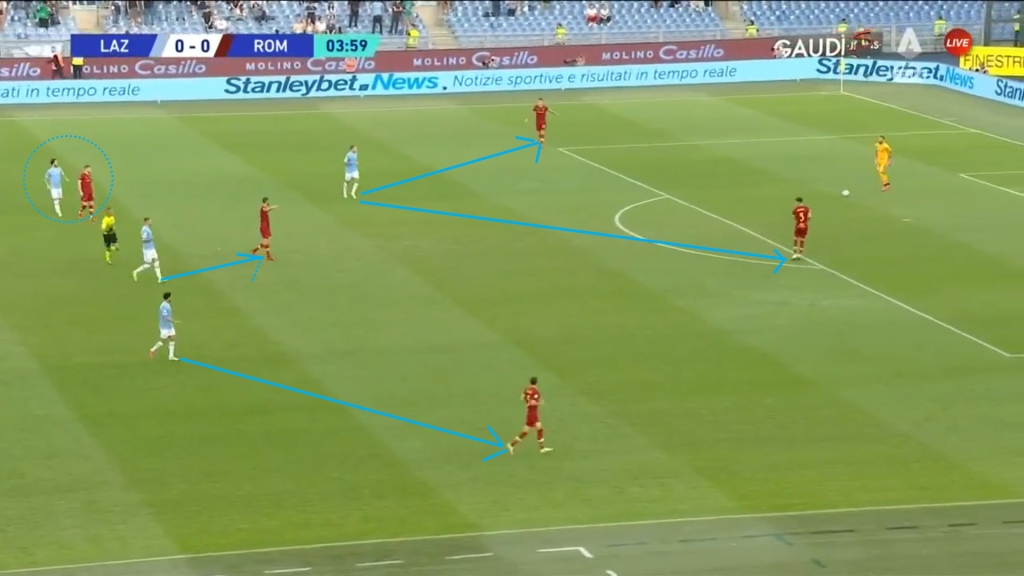 They also often try to use a “ball-oriented pressing scheme” where three players would leave their positions and try to win the ball back from the player in possession.

Sarri also blocked Mourinho’s “wing play” by outnumbering Roma players and covering the half-spaces. This prevented the Giallorossi from having 2v1 situations on the flanks.

Roma Without the Ball

Without the ball, Roma settled into a 4-4-2 formation using a narrow “mid-block” to try and squeeze the space between the defensive lines.

Lazio With the Ball

One of the chief principles of Sarriball is to play quick and short one-touch passes between players in the opposition half-spaces to prise them open before either using a cut-back, shooting, or squaring the ball to the opposite winger. This takes a lot of practice and understanding between the individuals of a team, hence why there have been growing pains. However, Lazio showed glimpses of this style of play throughout the match, as seen below.

Sarri always focuses on having players between the lines, and perhaps the biggest problem for Mourinho in the derby was exactly this. Both Milinkovic-Savic and Luis Alberto found space in this area which allowed them to have the time and space to turn and create chances. Mourinho played into the hands of Sarri by not trying to make his team more compact.

Verticality is one of the potent weapons in any brand of football, and Sarri also emphasizes this in his tactics. Once Lazio wins the ball back, they are instructed to make quick vertical passes to players upfront to capitalize on the momentary disorganization of the opposition system. Lazio’s third goal was a perfect example of this (as seen below). 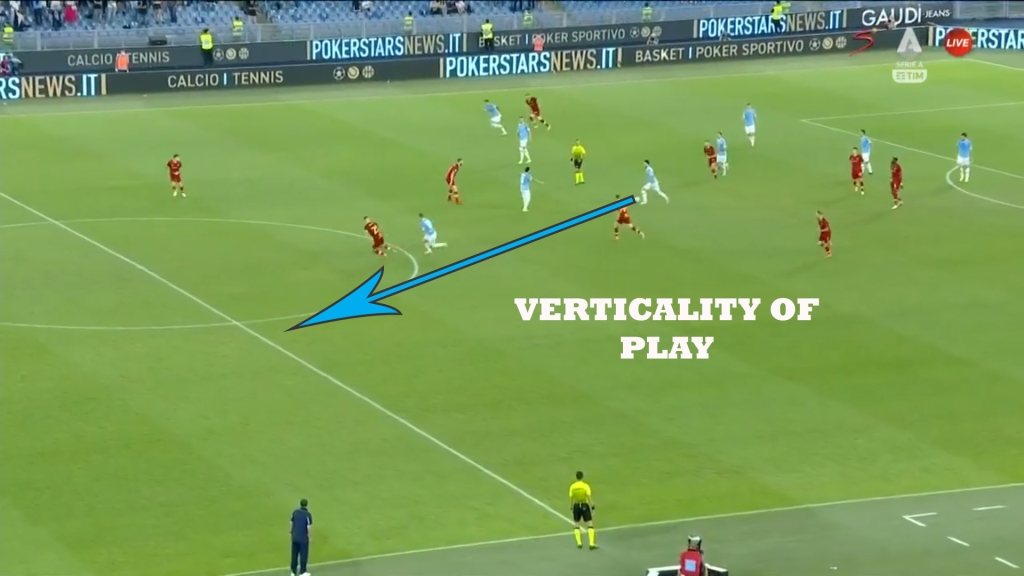 It is also important to mention that Sarri gives a lot of freedom to his full-backs to attack; however, he does not allow both of them to move forward at the same time. Depending on which flank the attack is from, full-backs are allowed to advance, otherwise, they are expected to stay back to keep the defensive shape.

Roma With the Ball

Mourinho had his wingers (Nicolo Zaniolo and El Shaarawy) tuck inside to let his full-backs overlap, thus creating space for crosses or cut-backs.

El Shaarawy would often drop deep to pull a Lazio defender out of position, thus allowing Mkhitaryan to act as a second striker and take the space vacated by the defender pulled out of position.

Roma also used a lot of verticality by trying to release Abraham on counters. This was accomplished by having the ball played behind the defense for the Englishman to chase the ball and then have runners from midfield act as options for the striker to pass or cross to. 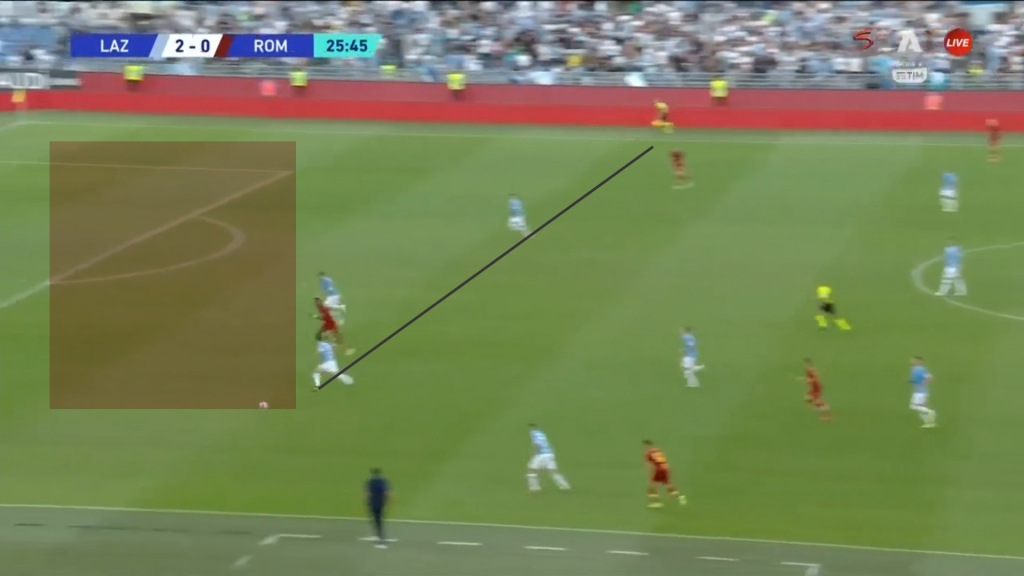 It is also important to note that Roma threatened a lot on set-pieces given the height advantage they had on Lazio players. 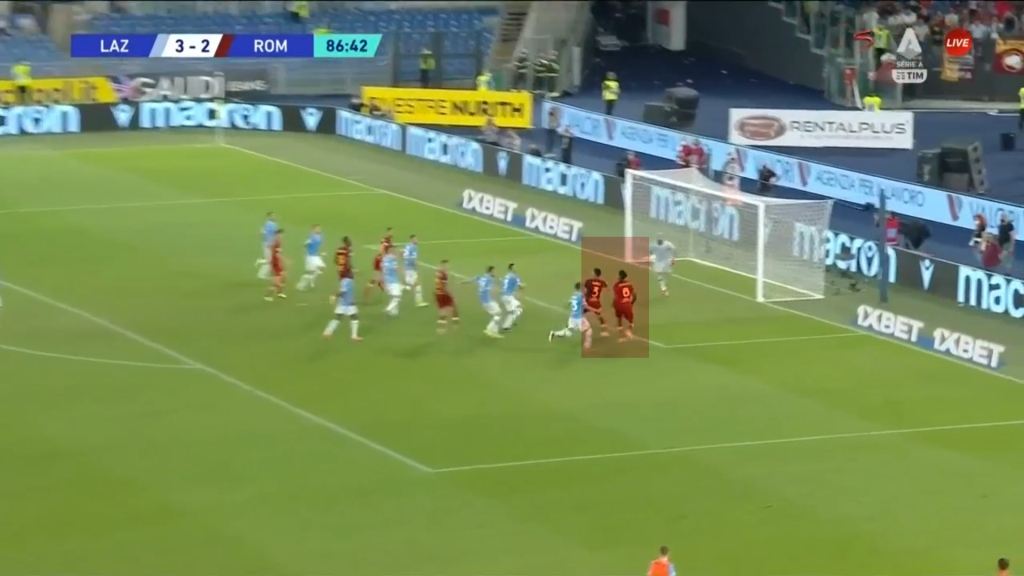 An area Lazio will need to improve is their compactness between defensive lines. On another day, a team with better players (like Milan did with Brahim Diaz) can easily exploit the space between the lines and can convert chances into goals. Although this is something Sarri is known for, it is clearly too early for it to be taking place.

Another problem they encountered while facing Milan was when Rafael Leao would escape Lazio’s ball-oriented press. This would create a lot of space for the opposition to maneuver and create chances. Against Roma, Lazio faced the same issue when Mourinho introduced Carles Perez who skipped past 2-3 players and switched the play.

A derby for the ages, it was a thrilling encounter between the two capital clubs. But in the end, Sarri reigned supreme and Lazio will have bragging rights until the clubs meet again later on this year.